New Book from Nolan Bushnell: Finding the Next Steve Jobs

Atari founder Nolan Bushnell released a new book this week called “Finding the Next Steve Jobs: How to Find, Hire, Keep and Nurture Creative Talent.” The book sets out to answer the popular Silicon Valley question: “Who is the next Steve Jobs?” and, in the process, offers advice on how to launch the next Apple or Atari. Bushnell was one of the first to hire Jobs and later turned down the chance to own one-third of Apple during its early years.

In his book, Bushnell writes that by 1980 he was beginning to think that the Apple decision “might turn out to be a mistake,” reports AllThingsD. 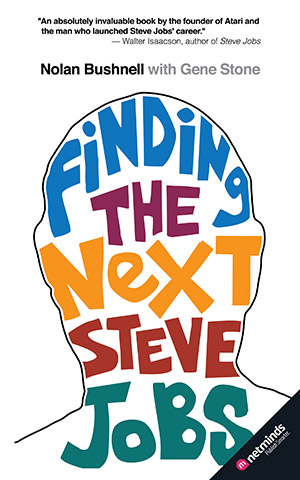 “‘Finding the Next Steve Jobs’ is being released by Net Minds, a print/e-book hybrid publishing startup led by former Yahoo exec Tim Sanders,” notes the article. “Bushnell said it uses Jobs as a metaphor for the creative iconoclasts who clash with corporate culture and can’t get hired.”

“Bushnell explains how to find, hire, and nurture the people who could turn your company into the next Atari or the next Apple,” reads the description on Net Minds Books. “Bushnell’s advice is constantly counter-intuitive, surprising, and atypical. When looking for employees, ignore credentials. Hire the obnoxious (in limited numbers). Demand a list of favorite books. Ask unanswerable questions. Comb through tweets.”

“Just because you’ve hired creatives doesn’t mean you’ll keep them,” it adds. “Once you have them, isolate them. Celebrate their failures. Encourage ADHD. Ply them with toys. Encourage them to make decisions by throwing dice. Invent haphazard holidays. Let them sleep.”

In an interview with AllThingsD, Bushnell answers the question: “Why are we even looking for the ‘next Steve Jobs?’”

“Steve took a failing computer company — and they probably would have never brought him back if they weren’t at the end of their rope — and turned it into the highest-market-cap company in the world,” he explains. “People were always aware that innovative solutions are good for your company. I think this just underscored it in a really powerful way. It wasn’t just through cutting costs or innovative marketing. Though Steve was a pretty good marketer.”

Bushnell also discusses a shifting digital mobile landscape, in which creating a successful app could be far more beneficial than creating a game.

“Do I really want to do a mobile game that’s one of 300,000, where discoverability is everything?” he asks. “You really have to have a little more sizzle on the steak. I would rather be one of 100 apps for Google Glass than one of 300,000 for iOS and Android.”

Bushnell emphasizes the importance for companies to forge ahead and work on the next thing. “I really believe that the future is happening whether we want it or not,” he suggests. “The companies that force the future to happen faster will succeed in the next 20 years, and the ones that are stuck in today will lose market share.”