Matchstick, the first HDMI streaming media stick based on the Firefox OS, announced that its originally planned February shipment date has now been pushed to August. The company says it has “decided to release the product when it is ready.” The decision to delay is the result of updating the hardware to a faster quad core chipset, improving the antenna to avoid the Wi-Fi connectivity issues experienced by similar products, and developing DRM support in order to attract more premium video apps such as Netflix.

“We are eating the cost to improve the hardware, and passing along the benefits of improved hardware to our backers,” explains the company on Kickstarter. “It’s a cost we are willingly paying for the promise of a better product.” 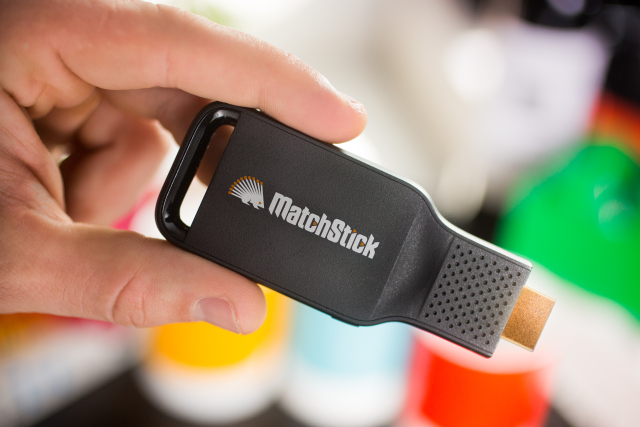 “Matchstick has decided to use Microsoft’s Playready DRM in order to get access to Netflix and other premium content services,” reports GigaOM. “As a Firefox OS-based device, it has to build a lot of things from scratch to make content protection work, and [Matchstick Content Manager Dan] Lee said that Matchstick intends to contribute code it develops to integrate DRM schemes back to the open source community.”

Matchstick plugs into the HDMI ports of televisions or monitors, enabling users to “fling” video, gaming and music content from a smartphone, tablet or laptop. “Use your smartphone or tablet as a remote control or to interact with the TV in ways never thought before possible,” suggests the Matchstick site.

We reported on the device back in October after it was successfully funded on Kickstarter and was being touted as an open source media dongle aiming for a retail price of $12 to $25. Working in cooperation with Mozilla, Matchstick was initially described as “an open Chromecast.”

The Kickstarter campaign attracted more than 17, 200 backers who pledged more than $470, 300 (nearly five times the project goal). Next up, the company plans to staff and fund its U.S. operations. It currently employs six people in Santa Clara, California and a dozen engineers in Beijing, China.