Since a group of students from the University of Texas unveiled the Lynx A 3D camera project on Kickstarter earlier this year, it has raised far beyond the project’s $50,000 fundraising goal. And as of last week, Lynx Laboratories was getting ready to ship out the first cameras. At the DEMO Mobile SF event, Engadget had an opportunity to demo a prototype, watching firsthand as the camera scanned a person’s head in real time. 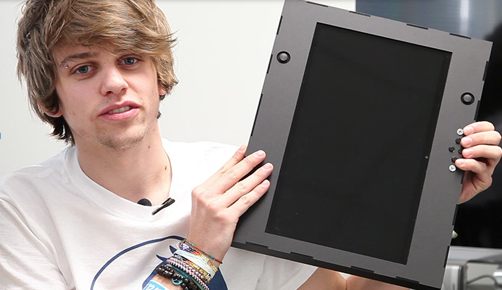 “For the uninitiated, the Lynx A is billed as a point-and-shoot 3D camera that uses Kinect-esque hardware to obtain depth mapping and imaging info from your surroundings,” explains Engadget. “Using GPU computing power and some custom code, it turns that data into 3D scene and object models or motion capture, and it displays the finished models on its 14-inch screen a minute or two after it’s finished recording — all for $1,799.”

(Note: According to the Lynx Laboratories order page, pricing is $1,999 for the basic model and $2,999 for the pro version.)

“Capturing with the device is really cool,” claims the project’s Kickstarter page. “From the startup screen, you can select from three features: scene modeling, object modeling, and motion capture. Each starts instantly and has a simple start/stop interface.”

According to the review, “the modeling process went off without a hitch. It was able to scan 2/3 of a human head in about a minute and within a couple minutes more it was displaying a 3D model ready to be manipulated and printed out by a Replicator or a Form 1.”