Israeli startup MUV Interactive unveiled Bird, a device the user wears on an index finger, to replace the mouse. The small plastic shell, covered with sensors, is on sale to the public for $150 for the first 15,000 units; the regular price is $250. With Bird, the user can move his or her hand as if controlling a touchscreen — but without any touch — for any TV or projector up to 300 inches. The device weighs about 20 grams (7/10th of an ounce). With plug-ins, Bird can control other devices, including a drone. 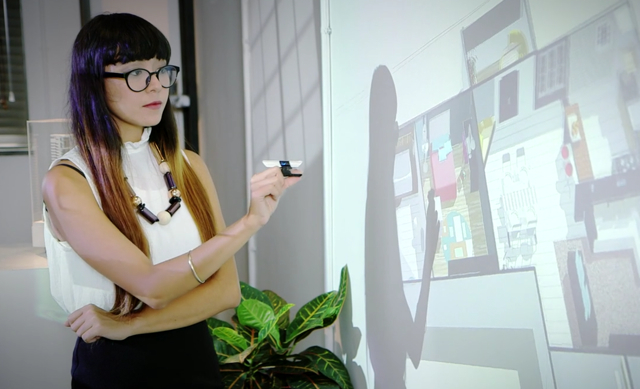 IHS Global Insight values the nascent market — which has largely been restricted to gaming and TV — at between $10 and $20 million. MUV co-founder and chief executive Rami Parham told Ars that he envisions Bird “in corporate presentation-style environments, classrooms, and even at home.”

Parham describes the array of sensors: one inside and several outside. “You have four sensors and you have inertial sensors, and you have some cameras and other sensors embedded within the device that you are not aware of,” he says. “They are all sending their information to the base unit… [that] runs our own algorithms and then provides final commands over Bluetooth to the screen.”

In a demo for Ars, Parham wore multiple Birds and “showcased a very intuitive way to play multiplayer ‘Fruit Ninja’.” He revealed that Android and iOS can already support more than 10 touch points.

“There is no reason to assume that more than one person will touch this screen or tablet, and we just enabled it,” Parham says. “[With Bird] we can have 10 people touching the tablet together.”

For more information, and a promotional video, visit MUV Interactive.