Is Ink-Jet Printing the Solution for Next-Gen OLED Displays?

Organic light-emitting diode (OLED) displays may soon replace LCD displays if the manufacturing kinks can be worked out. These energy-efficient, flexible, vibrant displays can now be produced more easily and economically on giant ink-jet printers. Though mass production still faces challenges, equipment maker Kateeva says it has a solution that curbs the amount of wasted material and unwanted defect-causing particles that are common to the traditional vacuum chamber approach. 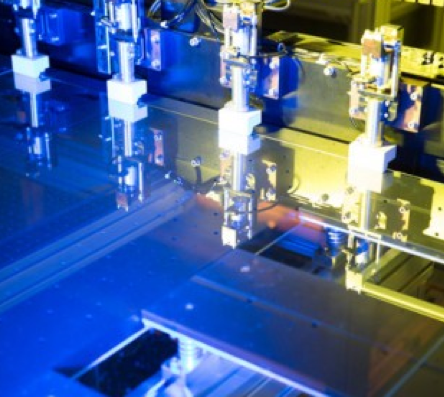 According to Technology Review, OLED displays, which use less power and can be made on plastic, are already being used in some high-end smartphones, digital cameras and TVs. Because of the flexible material, they’re also a good fit for wearable devices.

But until recently, OLED displays have been a challenge to produce. Even a few dust particles that make their way onto the materials that make up the displays could ruin them. And Touch Display Research president Jennifer Colegrove tells TR that the lifespan of printed materials have been short.

Now, Kateeva’s newest setup “features a movable platform that precisely positions glass panels or plastic sheets large enough for six 55-inch displays beneath custom print heads,” TR writes. Each print head has hundreds of nozzles “tuned to deposit picoliter-scale droplets in exact locations” that make up the pixels of the display. And reducing the risk of particle contamination has played a key role in the development process.

“Kateeva says it has reduced particle contamination by a factor of up to 10 by devising mechanical systems to reduce ambient turbulence and sweep away dust particles,” notes the article. “Further, its system operates in what Kateeva calls the first ‘production-worthy’ all-nitrogen process chamber, an ideal environment for making OLEDs because it prevents exposure to air and moisture.”

“The company says the tool can be incorporated fairly easily into existing display production lines,” TR reports, and if that proves to be true, consumers may soon see a new generation of TV and computer screens.