The new Hearst Digital Studios unit is starting an online channel of fitness and lifestyle videos inspired by Cosmopolitan magazine. For $9.95 per month, viewers can subscribe to CosmoBody, which will stream video content on-demand to the iOS app, the Android app, and Internet browsers. Hearst plans to launch similar online channels to expand its digital presence as business faces a downturn in traditional print and cable television markets. 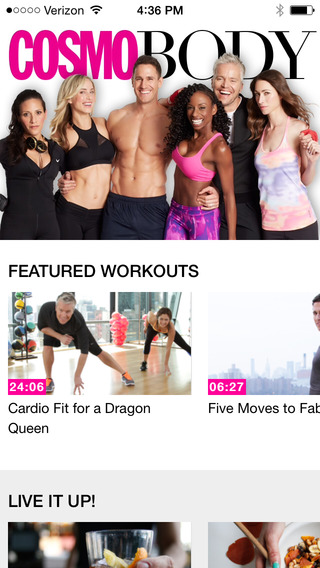 Vimbly Studios, which is run by hit television producer Mark Burnett, will produce CosmoBody’s spicy workout videos. Celebrity trainers will lead workouts designed to help viewers get their “revenge body” after a breakup or get “Sexier by Saturday.”

“This is going to revolutionize fitness,” said Joanna Coles, Cosmo editor in chief, said in The Wall Street Journal. “There’s just no one doing this.”

According to Variety, CosmoBody is shaking up the home fitness world, which is still reliant on workout DVDs. “We have a strategic advantage because (Cosmopolitan is) a brand that is recognized by young women globally,” Hearst Digital Studios chief Neeraj Khemlani said. “It’s market of people globally who want to pay for premium fitness content, and, oh by the way not watch the same workout in their basement for six months.”

It doesn’t stop there. Hearst is planning to add support for fitness trackers and other wearables so that viewers can further utilize technology in their interactions with the company. Also, Hearst is working with Roku to launch an app for the streaming video device in the fall of this year. Other online TV channels are also in the works.