Google hopes to provide Internet access to unserved areas of the world using high-altitude balloons. When the company announced Project Loon a year ago many people were skeptical. Since then, Google announced that it has been able to extend balloon flight times and add mobile connectivity to the service. Recently, Loon has been providing as much as 22MB per second to a ground antenna and 5MB per second to a handset, success that suggests there will be ways to monetize the technology. 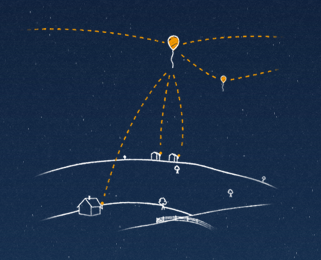 “This is the poster child for Google X,” says division head Astro Teller. “The balloons are delivering 10x more bandwidth, 10x steer-ability, and are staying up 10x as long. That’s the kind of progress that can only happen a few more times until we’re in a problematically good place.”

When Google added the ability to send data using LTE, it advanced Project Loon by giving people direct access to the Internet with their mobile phones.

“In addition to connecting the last few billion (and often cash-poor) Internet users, the project might serve already-connected people with fat wallets by partnering with existing providers to deliver a super-roaming experience,” explains Wired.

Telecommunications companies have pushed to work with Google because LTE makes it possible for the service to interweave with existing mobile data networks, and does not actually pose competition for these large companies.

“It’s not limited to rural areas,” Teller says. “Even in the middle of Silicon Valley you can lose connections while driving; large buildings and hills can block the signals. Balloons can fill in dead spots.”

Google’s goals for next year include: routine flights of 100 days, 100 balloons in the air at once, and then a full ring of 300 to 400 balloons circling the globe to offer continuous service to a specific area.