Google recently integrated full Google Cast capability directly into its Chrome browser, a significant upgrade to its previous Cast extension that allowed streaming from Chrome to supported devices like the company’s popular Chromecast. The Cast icon will appear on all sites that support it, enabling Cast functionality from the Chrome menu, no software download required. Cast is also now available on third party hardware such as TV sets and speakers. More than 38 million casts were sent from Chrome in August alone, representing over 50 million hours of consuming media content.

Those figures may likely spike now that media sites including Netflix and Google Play Music will conveniently feature the Cast icon in the address bar. 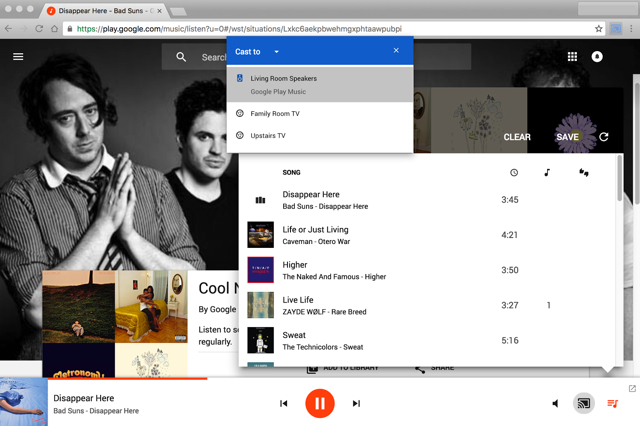 “Cast has come along way in the past two years,” suggests TechCrunch. “You can even cast to other apps, like Google Hangouts, and the Cast for Education app, giving more options for use in multi-user settings like classrooms and virtual meetings.”

Since Google Cast’s launch two years ago, the Chrome team has been working toward improving the casting experience by launching new devices such as Chromecast Audio and partnering with device manufacturers. The team has also been working on quality enhancements, “with the vast majority of casting sessions now in HD,” explains product manager Stephen Konig on the Google Chrome Blog.

While it may seem like a mere convenience at this point, direct Chrome integration could bring Cast “a step closer to being a seamless transit channel for your digital life,” notes TechCrunch. With improved network bandwidth and reliability, “Cast could become the underpinning for a whole-home client-based computing experience where things like TVs and smart appliances get all their smarts from a single brain.”