Gartner Report Says 3D Printing Not Quite Ready for the Home

Gartner analysts estimate that 3D printing our own food, gifts, shoes and other products is at least five to 10 years away. In a report released earlier this week, Gartner suggested that the 3D printing of product models is two years away from its peak usage, while mainstream adoption of 3D printing for medical applications is about two to five years away. Although the technology is advancing and printers are coming down in price, the concept is not quite ready for everyday use in the home.

“Gartner estimated last year that the number of consumer and enterprise printers shipped will grow to more than 1 million in 2017 from about 38,000 in 2012, with consumer spending increasing to $5.7 billion from $288 million over the same period,” reports The Wall Street Journal.

According to McKinsey & Company, by 2025 3D printing will have an economic impact of between $230 and $550 billion per year.

“The idea of being able to print cake toppers and other specialty sweets, if you will, for events ranging from weddings to corporate events, has a great potential value,” Gartner analyst Pete Basiliere told WSJ. “They can monetize that today. For the hospitality industry, it makes a lot of sense. Now they can literally make a wedding topper that is in the image of the couple.”

“Medical devices are the area that gets me the most excited,” he added. “I benefit from 3D printed hearing aids. The shells from my hearing aid speakers were 3D printed. The opportunity is great. If you look at California-based health care company Not Impossible Labs, they came up with ideas around how to design a basic prosthetic arm. They brought a printer to Sudan after having taught the locals how to make prosthetics. That’s life altering.” 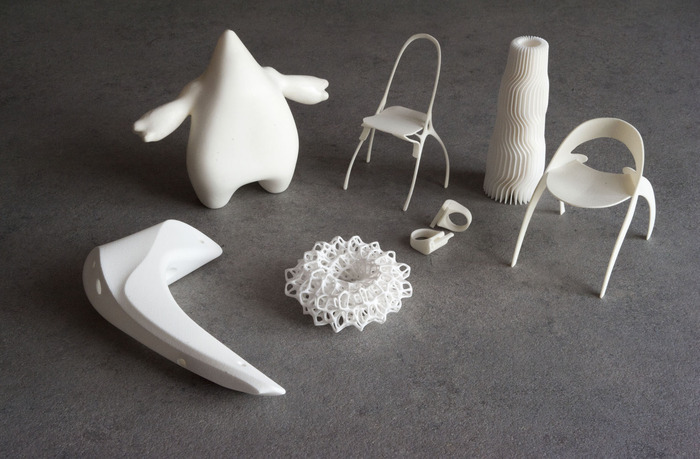 In related news, prices are coming down on the higher-end selective laser sintering (SLS) printers, which have commonly retailed for hundreds of thousands of dollars.

“That is due in part to the complexity of the parts that go into the machines, but also due to patents covering SLS technology,” explains GigaOM. “Fused deposition modeling (FDM) and stereolithography (SLA) printers didn’t drop in price until key patents expired, and it was thought that once SLS patents began to drop away this year the same pattern would emerge.”

Now, more affordable alternatives are in the works. Italian 3D printer company Sharebot has completed development of an SLS printer expected to cost less than $27,000. And startup Norge is crowdfunding a desktop-sized machine for $8,300 via Kickstarter (see printed samples above), while a larger $33,000 version is currently available on its website.

“This may be the beginning of SLS following in the footsteps of the two cheaper technologies, spurring the creation of even less expensive options,” suggests GigaOM. “It’s unlikely that SLS machines will soon be available for the sub-$500 price that has become so common with desktop 3D printers due to the higher cost of the parts involved, but it is looking more likely that it will at least be an option for small businesses.”