The Fox Now video app allows users to watch recent episodes of Fox series the day after they air. In a new update to its version for Apple devices, Fox has added a feature that suggests shows to the user based on preferences and viewing history. The upgraded user interface, which is based on the iOS 7 design, intends to keep fans watching more video by providing useful recommendations. Fox Now also features expanded TV Everywhere access with more current and past programming. 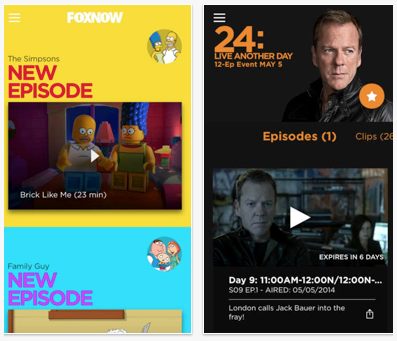 “For the recommendations feature, Fox licensed technology from U.K.-based ThinkAnalytics, which heretofore has focused on pay-TV operators,” reports Variety. “Using the ThinkAnalytics engine, the Fox Now app determines that if you, say, have watched a lot of episodes of ‘The Simpsons,’ you’re likely a big animation fan and it will then suggest recent eps of shows like ‘American Dad’ or ‘Bob’s Burgers.'”

“In the past year, the number of subscribers able to access additional episodes and content via the service has more than doubled with the addition of Time Warner Cable, Cox, Cablevision and Bright House Networks; those are in addition to Comcast, Verizon, AT&T, Suddenlink and several smaller operators,” notes the article.

Fox Now 2.0 for iOS also includes a continuous-playback feature (that automatically starts the next episode once one concludes) along with third-party ad network integration, which was requested by marketers.

Fox Now is also available on devices including Android phones and tablets, Roku set-tops, Xbox 360 and Xbox One consoles and Samsung Smart TVs.