Fitbit to Launch First Real Smartwatch With Focus on Fitness

Fitbit will debut its first true smartwatch, the $300 Ionic, in October. This new gadget, however, is focused on the company’s core competency — fitness — although it still offers typical smartwatch functionalities, including music, mobile payments and push notifications. Since Fitbit views health and fitness as the killer app, the Ionic offers an expanded range of health-oriented functions. Fitbit co-founder/chief executive James Park said the decision to take this tack was because he saw that consumers have been confused about the purpose of smartwatches.

Wired reports that, “like most Fitbit products, the Ionic has a utilitarian look,” with a “small rectangular display [that] sits inside the square watch face, like a mini wrist television.” Constructed of nano-molded aluminum, the “angular body … slants downward from the face in an octagonal shape, before connecting with the plastic strap.” 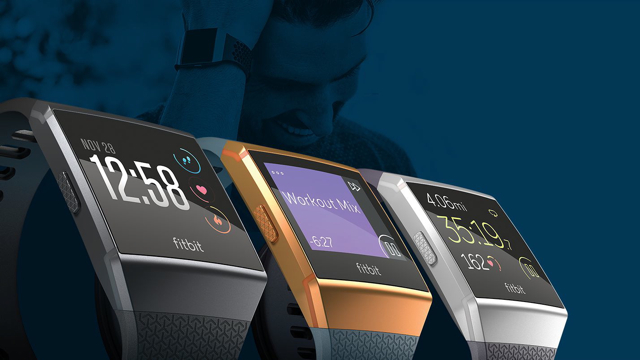 “We call it geo-organic,” said Fitbit head of design Jonah Becker. The Ionic is intended as a wearable that can actually be worn “all day and night,” and thus offers “four-plus days of battery life (10 hours if you’re using GPS and streaming music),” via a battery “layered inside the watch’s body, along with an accelerometer and antennas for GPS, Bluetooth, and NFC, which enables mobile payments.”

Fitbit research head Shelten Yuen notes the LED in the center of the watch is “a tri-wavelength sensor” that can “distinguish between red, green and infrared wavelengths,” thus enabling it to “gather more fine grained information like relative blood oxygen level.”

Fitbit’s PurePulse “tracks heart rate by shining green light onto the top of the wrist,” and because “blood absorbs green light, photodiodes on the underside of the watch can monitor how much light is being absorbed at any given time.”

Fitbit will also be able to “keep track of breathing habits, which could in the future help diagnose conditions like sleep apnea.” The sensors “will be available to third party developers who want to build apps using the data gathered from the Ionic.”

The Ionic will launch with four “main partner apps” — Pandora streaming, AccuWeather, Starbucks mobile payments, and a Strava activity tracking, but it will open to other developers this fall. Although the Ionic is poised to compete with smartwatches from Apple and others, one thing it won’t be is LTE-enabled, says The Wall Street Journal, which reports that “Apple’s next watch, slated for release this fall, will be capable of connecting to cellular networks, allowing users to send and receive texts without being tethered to the iPhone.”