At CES, Dish debuted AirTV, a 4K set-top box that features Sling TV, Netflix and Android TV for streaming apps and OTA channels, with the Sling TV guide as an organizer for all of the content. The accompanying remote control, which connects to the box via Bluetooth and offers voice controls, provides dedicated buttons for the streaming libraries. The set-top box is “about the size of an Apple TV or Roku box,” with ports for power, Ethernet, HDMI and USB. AirTV is priced at $100 or $130 for the antenna-compatible version.

Engadget reports that the Sling TV guide features “Netflix-like rows of options divided up by service,” including OTA channels, with horizontal scrolling that reveals each service’s options. The user does not need a paid Sling TV account to use AirTV to access OTA channels and streaming apps. 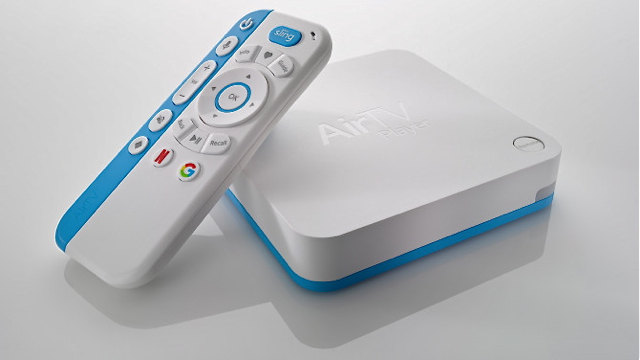 “Dish is hoping you’ll commit to its service as that makes the device more compelling,” and “also adds a monthly subscription fee that varies based on the package(s) you select.” For its Best of CES Awards, Engadget deemed Dish AirTV with its Best Home Theater Product for its “blend of streaming and over-the-air broadcast.”

According to TechCrunch, the fact that it’s “not necessary for AirTV users to even use Sling TV, the subscription over-the-top streaming service Dish owns” is “another sign of the changing world that TV and cable providers now find themselves in.” Also reported is that Dish unveiled a new “Optimized for Sling TV” certification program, “a way for platforms and streaming gadgets to signal their ability to deliver a quality streaming experience for Sling TV.”