Nowhere at CES does more applied innovation come together than in the North Hall automotive exhibits. That is not something that could have been said just a few years ago when the hall was more about sound systems and aftermarket gizmos. The car is now a rolling precursor of the connected/IoT future, redefined mobility, and even the development of smart cities. GM and VW keynotes will showcase new electric cars and two companies, Faraday Future and Rinspeed, promise dazzling concepts, including one with a drone landing pad.

High-profile announcements and demonstrations of autonomous vehicles at CES 2015 made headlines. But very little of that excitement could be driven home by the average person. If Mercedes-Benz and Audi represented luxury in motion, this year’s keynotes by General Motors CEO Mary Barra and VW chairman Dr. Herbert Diess promise to show how much and how quickly advanced innovation flows into the mass market. GM adds a longrange EV, the Chevrolet Bolt, with an estimate range of 200 miles. VW is expected to roll out an electric microbus, if the early hints are accurate.

“As many as nine major carmakers and 100 automotive technology companies will be on hand at CES 2016, representing a hefty 25 percent increase in car tech companies over CES 2015,” according to TechRadar.

Beside the familiar names are companies such as Faraday Future, Rinspeed, Delphi, and Nvidia igniting the conversation.

Faraday Future (FF) is a Gardena, California-based startup founded less than 2 years ago and boasting several former Tesla executives and a founding member of BMW I Design among their leadership.

“At Faraday Future, we believe that today’s cars do not meet today’s needs,” citing technological innovations, energy constraints, urban crowding and demanding lifestyles on their website as contributing factors to “a fundamental shift in our relationships with our cars. By placing equal emphasis on automotive and technology disciplines, our team of experts is uniquely positioned to take a user-centric, technology-first approach to vehicle design with the ultimate aim of connecting the automotive experience to the rest of your life.”

FF promises a “Glimpse into the Future” at the North Hall booth #4535. Details of their concept car are cloaked until CES opens but they say they will launch, most likely in 2017, with “fully-electric vehicles that will offer smart and seamless connectivity to the outside world.” 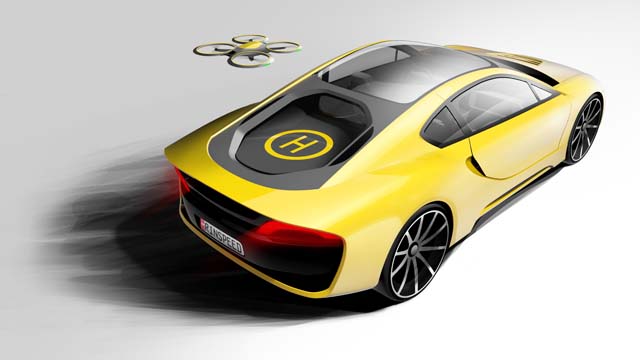 Rinspeed, a “creative think tank and mobility lab for the automotive industry” founded by Frank Rinderknecht and located on the outskirts of Zurich, Switzerland, announced that it will show its Σtos sports car developed in conjunction with 29 partners and suppliers including Corning, drone maker DJI Technology, and Harman International.

Entertainment companies will note this intriguing section of the company press release: “In autonomous mode, the steering wheel folds up elegantly and retracts completely into the dashboard. The two curved widescreens individually move closer to the occupants to provide a better view… Rinspeed Σtos uses the innovative Harman Connected Car technologies” to provide the passengers with a unique infotainment experience. “Just like a personal assistant, the system operates in a thinking, courteous and anticipatory manner. In addition, it delivers perfect entertainment, connectivity and maximum safety.”

And about that drone landing pad? “The many benefits this offers are evident,” they say. “For example, it could fetch a bouquet of flowers the driver ordered online and even deliver it directly to the lucky recipient. It could also take a video of the wild ride on the favorite fun road and stream it live to friends!”

Automotive parts and technology supplier Delphi rolls out its own autonomous driving concept car this CES. It is an example of supplier driven innovation as Delphi shows how it is advancing active safety and automated driving by incorporating vehicle-to-everything (V2E) capabilities into production. The technology enables Delphi’s vehicle to communicate with streets, signs, traffic lights, other cars and even pedestrians.

“We imagine a world with zero traffic accidents,” said Jeff Owens, Delphi chief technology officer. “To get there we will need a convergence of active safety, sensor fusion, connectivity platforms and advanced software.”

According to a report on I4U News, “The Delphi car will also feature a 3D digital instrument cluster drivers can customize to seem like a 2016 Chevrolet Corvette or 1960s Mustang,” which could be a fun new entertainment licensing opportunity.

Artificial intelligence is the focus of research Toyota is expected to announced in more detail on January 5. The automaker formed the Toyota Research Institute with a $1 billion funding commitment over the next five years to study AI for automobiles, robotics and scientific discovery. “TRI will help bridge the gap between fundamental research and product development,” Toyota notes in its media advisory.

Nvidia, a company known for its powerful graphics processors, is also one of the automotive industry’s leading technology providers. In its North Hall booth #2823, expect to see a range of innovations introduced into the Nvidia Drive platforms and advances in Deep Learning, the growing branch of machine learning used to solve many big data problems including computer vision, speech recognition and natural language processing.

Nvidia solutions will be featured on several panel sessions during the Connect2Car conference and CES meetings of the GENIVI Alliance.

The consulting firm Deloitte hosts a trio of conference sessions on January 8 exploring consumers and the rise of shared mobility, implications for players in tomorrow’s mobility ecosystem and executive perspectives on the future of transportation.

CTA also presents an Automotive Technology conference track. January 7 sessions include Building Consumer Trust in Vehicle Technology, Reinventing the Phone-Car Connection, CNET Navigates the Future of Connected Cars, What Drives the Self-Driving Car Business? and a January 8 panel on The Battle for the Automotive User Interface.

ETC will continue to provide coverage on automotive as part of its extensive CES coverage in January.