LG Electronics announced that it will introduce a 21:9 “UltraWide” monitor designed specifically for gamers. The 34-inch curved-screen monitor, model 34UM67, is the company’s first 21:9 monitor created especially for graphics-intensive gaming with Advanced Micro Devices’ FreeSync technology. The AMD tech reportedly eliminates screen-tearing, an image problem that can result when the monitor and graphics card are not in sync. We expect to see LG’s new monitor on display at CES next week.

“Graphics chip maker Nvidia, a rival to AMD, has previously its own rival technology for dealing with screen-tearing,” reports VentureBeat. “The new monitor will enable fluid motion during fast gameplay scenes in games. It has an aspect ratio of 21:9, which is wider than the typical 16:9 monitors. It caters to gamers, digital imaging artists, and business professionals.” 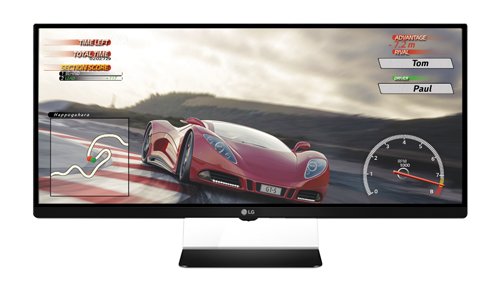 “LG’s UltraWide monitor has a curved screen in ‘quad HD’ resolution, or 3440 x 1440. It has a 178-degree viewing angle, and uses In-Plane Switching (IPS) display technology for better colors.”

Popular games that already support 21:9 resolution include “ArcheAge,” “Battlefield 4” and “World of Warcraft.”

Pricing for the new monitor has yet to be announced. According to IDC, LG has led this category for seven quarters, with 77.3 percent of the world’s 21:9 monitors.

“AMD FreeSync technology is an innovative monitor technology, based on free and open industry standards, to eliminate the tearing and stuttering that has plagued PC gaming for 30 years,” said Roy Taylor, VP of ISV/IHV Partner Group at AMD. “We are pleased that LG Electronics stands with us with truly exciting AMD FreeSync-ready displays like the LG UltraWide Gaming Monitor.”