Under the theme “Experiences Reimagined,” Intel CEO Brian Krzanich kicked off CES 2016 with a keynote presentation packed with product announcements, collaborations and live demonstrations. Today’s products are designed and defined by experiences, said Krzanich, experiences enabled by technology. With a flair of showmanship, the keynote opened with fireworks, presented not with explosives but a record-setting fleet of illuminated drones, and closed with music played with motion sensors, all of which served to illustrate what Krzanich called “the sensification of computing.”

The re-imagination of fireworks, an experience that Krzanich noted dates back to the 7th century, was an example of how Intel looks at everyday activities and sees how to create new experiences. The keynote focused on three primary areas: sports, health and wellness, and creativity.

The rise of eSports and competitive gameplay creates a new arena for re-imagination. “Technology,” said Krzanich, “enables user contribution” to create truly immersive experiences… “the sights, sounds and feel of the game.”

In a cool live demo, Krzanich was “scanned” via a tablet and a very realistic rendering of his face and head was instantly incorporated into the in-game character.

“Instead of using avatars, Intel puts you into the game using RealSense,” he said. “Gaming should not only be immersive, it should be personal.”

Intel sees a tremendous opportunity with live action sports. Using Replay’s freeD technology optimized for Intel platforms, Intel imagines a 3D experience — and demonstrated it using freeD — to show how sports fans will be able to re-watch key moments of sporting events from nearly every conceivable angle and share a custom created clip with the world.

FreeD takes advantage of 6th generation Intel Core processors and Intel server technology that has been optimized to deliver this immersive entertainment experience.

John Skipper, ESPN president and co-chairman of Disney Media Networks, joined Krzanich onstage to announce a collaboration with ESPN to showcase the latest technology set to add new levels of data-powered insights to the feats of athleticism at X Games Aspen 2016. Intel’s tiny, low power Intel Curie module — at a cost of approximately $10 per unit — will be integrated into the Men’s Snowboard Slopestyle and Men’s Snowboard Big Air competitions to provide real-time data on athlete performance such as in-air rotations, jump height, jump distance, speed and force on landing. 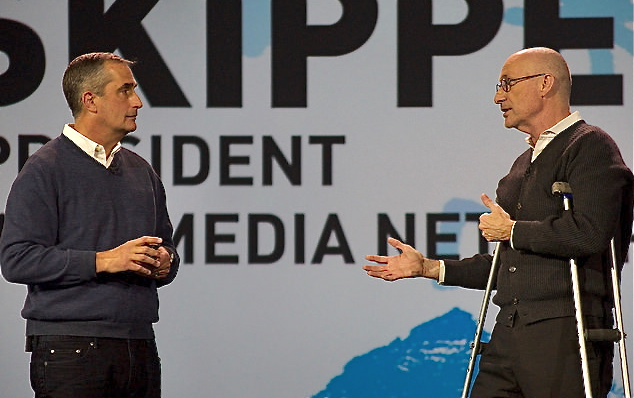 This access to new data will provide athletes with greater insights into their performance, provide additional metrics for on-air analysts, and change the fan experience both at home and in the stands. The competitions will be televised on ESPN and ABC.

In another announcement made from the stage, Intel and Red Bull Media House now have a global partnership that will extend into multiple genres and platforms. Red Bull Media House CTO Andreas Gall joined Krzanich to demonstrate how athletes and spectators can get information about the performance instantly with the help of Intel Curie technology.

In the area of health and wellness, Intel announced joint efforts with New Balance and Oakley to personalize and advance the tools people use to be more active. The Oakley demo previewed the first look at “Radar Pace” — described in the Intel press materials as “smart eyewear featuring a voice-activated, real-time coaching system.”

Oakley is the first Luxottica Group brand that Intel is working with to “fuse premium, luxury and sports eyewear with smart technology. Engineered with Intel Innovation and crafted with Oakley’s high-quality design and materials, the smart eyewear is designed to provide runners, cyclists and workout enthusiasts with in-the-moment feedback and analytics, helping to track progress and improve real-time performance.”

A 10-minute pre-show presentation proved to be the overture for the concluding creativity segment.

Krzanich announced a multiyear partnership with The Recording Academy as part of its official “Next Generation of Grammy Moments” to bring technological innovation to the program so people can see, engage and be amazed by the evolution of technology in music. The first artist to collaborate with Intel to create a unique musical experience — will be music icon Lady Gaga.

These collaborations underscore the three trends that Krzanich said are shaping the future: the smart and connected world, technologies gaining human-like senses, and computing becoming ultra-personal.

“There is a rapidly growing role for technology that is at once transformative, unprecedented and accessible,” said Krzanich. “With people choosing experiences over products more than ever before, Intel technology is a catalyst to making amazing new experiences possible, and ultimately improving the world in which we live.” 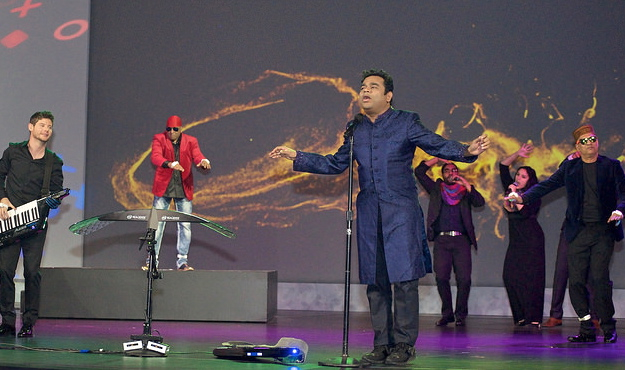