CES 2013: A Look at Some of the More Interesting Predictions

A favorite pastime of analysts in recent years has been attempting to forecast what will prove to be the top trends emerging from the annual International CES confab in Las Vegas. Of course, this year is no different, as consumer electronics continue to branch out from purely an interest of the technorati, become more intrinsically tied to our lifestyles and subsequently draw more mainstream media attention. As we get ready to hit the show floor when the exhibition opens its doors tomorrow, we take a look at some of the more interesting forecasts recently published. (One of our favorite pastimes is discovering who will be right and who will end up missing the mark.)

The Hollywood Reporter lists five new tech trends in its “CES Cheat Sheet”:
1) It isn’t about Apple anymore: The meteoric success of the iPhone and then the iPad has put Apple in the personal tech driver’s seat for more than six years. “Now the rest of the industry has caught up again, with several manufacturers making very competent Android-based iPad competitors. More importantly, though, Apple has run out of frontiers… This isn’t to say Apple will stop being successful… But it is no longer the only game in town.”
2) The bargain market will supercharge digital media consumption: Expect to see a new wave of “competent and low-cost Android-based tablets,” including tablets in the $100 range.
3) Meaningful second screen experiences are still AWOL: We’re likely to hear more about second screen experiences on phones and tablets, tied to the TV viewing experience. “Creators have taken this as a cue that they should be providing tailor-made experiences for their users that enhance the original content. If only they could figure out how to do it well.”
4) Is Internet the new cable? The jury is still out: “Recent years have seen a sharp uptick in the quality of content being made exclusively for the Internet… However, most of what is available represents an on-demand alternative to the fundamental proposition of cable, i.e. wider choice than network, but nothing approaching the wide-open horizons of the Internet.”
5) Upgraded display tech is a red herring, for now: In recent years, it’s been 3D and smart TVs, while this year it’s all about 4K. “But it’s a hard thing to get too worked up about — for now. 4K resolution only really matters in TVs larger than 70-inches, and these will be quite expensive for a while. In addition, there is currently little in the way of content for the upgraded sets.” 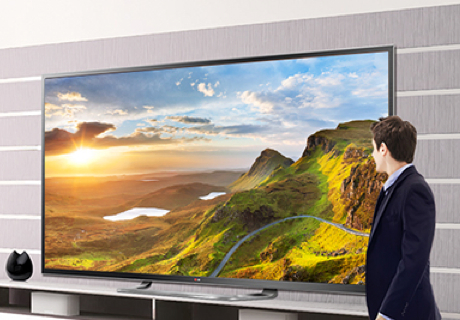 1) Ultra High-Definition TVs: “A number of TV manufacturers (notably LG and Sony) have already launched 4K sets, but CES 2013 will inevitably be their big arrival, in multiple screen sizes. Since 3D failed to take the world by storm, the TV industry has been looking for another way to drive innovation (and thus revenues), and many are placing their bets on 4K.”
2) Mobile Everywhere: “With in-car app platforms such as Ford Sync and Livio Connect, the apps on your phone can extend their reach to your dashboard. A host of software makers also want to be the go-to second-screen app for TV watching — a category due for a major expansion (and possible shakeout) in 2013. And as the Nest has shown, using your phone to control things like lighting and heat doesn’t have to be an expensive proposition.”
3) Bluetooth Speakers, Lightning Connectors and Soundbars: Expect “dozens if not hundreds” wireless speakers at the show, with a focus on convenience, style and best sound. “Apple’s Lightning connector has given the category a jolt, and accessory makers are now scrambling to release Lightning-compatible docks, which are guaranteed to be everywhere.”
4) Sensors and New Interfaces: “Fitness gadgets — with accelerometers, gyroscopes and even heart-rate monitors — will be everywhere at CES 2013, and their common thread is the ability to detect your movements and intent better than anything that came before… Those fitness gadgets are the tip of an iceberg that’s made up of sensors, data and new user-interface paradigms.” Expect to see Kinect-like gesture control and eye tracking embedded in more gadgets.
5) More Unique Gadgets: “While CES in years past was often an exercise in incremental upgrades in predictable categories, early buzz about CES 2013 points toward bolder, more notable product launches (case in point: Samsung’s ‘something new’ ad). Some rock-star Kickstarters like the Pebble will be at the show, and you can bet other newbies will be looking to them for guidance.”