Western Digital’s HGST subsidiary announced yesterday it is shipping a helium-filled, 3.5-in hard disk drive that has been more than 10 years in the making. The company says the new drive offers 50 percent more capacity than current 4TB drives and uses 23 percent less power and is 38 percent lighter. While pricing has yet to be announced, the company says the drives will “command a premium” based on the lower total cost of ownership. HGST plans to sell the drives to server and storage array manufacturers. 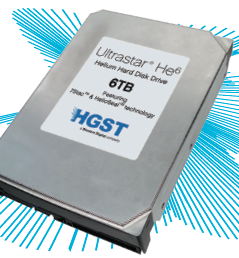 “Without changing the height, the new 6TB Ultrastar He6 enterprise-class hard drive crams seven disk platters into what was a five disk-platter, 4TB Ultrastar drive,” reports Computerworld. The premium cost will be based on capacity in addition to “the lower total cost of ownership that the helium technology offers.”

The power reduction enabled by the high-capacity drives is expected to be a particular benefit to large data centers and cloud infrastructures.

Sealing air out of the drive keeps out humidity and contaminants. HGST says the helium drives run 4-5 degrees cooler than most 7200rpm drives. “At one-seventh the density of air, helium produces less drag on the moving components of a drive — the spinning disk platters and actuator arms — which translates into less friction and lower operating temperatures,” notes the article.

HGST has been working with computer manufacturers, cloud and research groups, and social media and search companies to qualify the drive.

Netflix, which uses HGST high-capacity hard drives in its data centers to serve billions of hours of streaming video to its subscribers, said the increase in capacity and lower power-usage of the helium-filled drives will significantly help optimize their server infrastructure.

“I’d say helium is one of the major breakthroughs in the hard drive industry because you can only increase the platter areal density so much with today’s technology,” said Fang Zhang, an analyst at IHS.