Blippex is a newcomer search engine that is essentially built by its users. The site takes users’ submissions in order to provide the data for search results. Its results are different from other popular search engines as it is anonymous and does not identify users. In contrast, Google’s search is not anonymous as its business is based on advertising, with much of it personal and targeted to the user. Blippex will have to prove it can rival the competition. 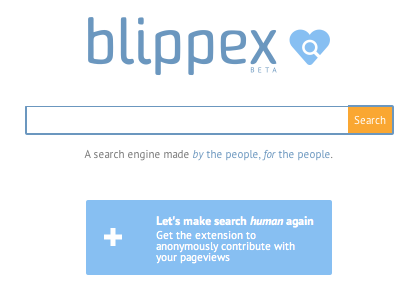 Many competing search websites attempt to imitate Google. “We thought it strange that to compete, you had to have the same search results as them,” says Max Kossatz, co-founder of Blippex (with Gerald Baeck). “I think that’s why there’s been no innovation in search in over 10 years.”

Blippex’s search results are based on data gathered from its users. One key feature of the site is privacy, where gathered data is anonymous and unconnected to a specific Blippex user.

The search engine’s algorithm, called DwellRank, determines relevance based on the duration users spend on a site and the number of times Blippex users have visited the site. According to an independent study from researchers at the University of Massachusetts Amherst, the amount of time a person spends on a Web page or other item, is a good measure of the Web page’s importance.

The user data for Blippex’s search is obtained with special plugins for a Web browser. It measures how long a user spends on each site, and sends these statistics to Blippex.

However, Blippex can only display results of pages that users have actually visited. It currently has only two million pages, while Google has indexed tens of billions of pages and trillions of links.

“Kossatz and Baeck are continually thinking about how to make Blippex know even less about its users,” notes Quartz. “If Blippex doesn’t have a piece of data, it can’t ever be stolen by hackers or subpoenaed by a government. To that end, they’ve made Blippex’s browser plugin open source, so that anyone can examine its code and verify that it’s not grabbing information the team says it isn’t.”

Blippex will also debut a browser plugin that will communicate with others as a peer-to-peer network similar to Bittorrent, rather than connect directly with the Blippex servers. With data transferring among different plugins, it will be untraceable.