Tel Aviv-based StoreDot claims it has developed a battery technology that can charge a mobile phone in 30 seconds and an electric car in mere minutes. The prototype can reportedly store a higher charge more quickly by using nanotechnology to synthesize artificial molecules. Bio-organic peptide molecules known as “nanodots” enable the rapid absorption and retention of power. StoreDot is aiming to have a slimmer version of the current prototype available for the smartphone market by 2016.

“These are new materials, they have never been developed before,” said Doron Myersdorf, founder and chief executive of StoreDot, which has so far raised $48 million from two rounds of funding, and is said to have backing from a top mobile phone manufacturer. 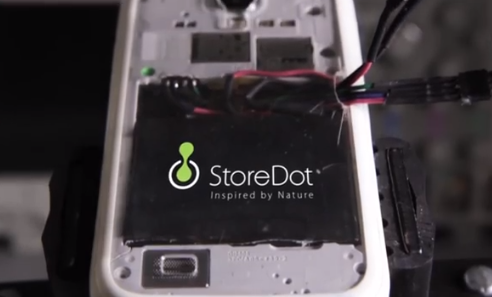 “With the number of smartphone users forecast to reach 1.75 billion this year, StoreDot sees a big market, and some experts think that — with more work — it could be on to a winner,” reports Reuters. “Myersdorf said a fast-charge phone would cost $100-$150 more than current models and would ultimately be able to handle 1,500 recharge/discharge cycles, giving it about three years of life.”

“We live in a power hungry world… people are constantly chasing a power outlet. StoreDot has the potential to solve this real big problem,” said analyst Zack Weisfeld. “They still have some way to go, to deal with size of battery and power cycle rounds, but if solvable, it’s a very big breakthrough.”

StoreDot will be exhibiting on Level 2 of the Sands Expo in Las Vegas during the 2015 International CES, January 6-9.