VSN Mobil has begun shipping its $399 V.360, billed as “the first device to capture 360 degrees of video or still images with a 4K/16 megapixel imager in full 1080p high definition.” The camera, currently available via Amazon and VSN Mobil’s store, could become the GoPro of panoramic video, an emerging market sector growing in popularity amongst manufacturers. The V.360 joins a variety of panoramic offerings, including the 360cam, the Bublcam, the Centr, the Giroptic and the Panono. 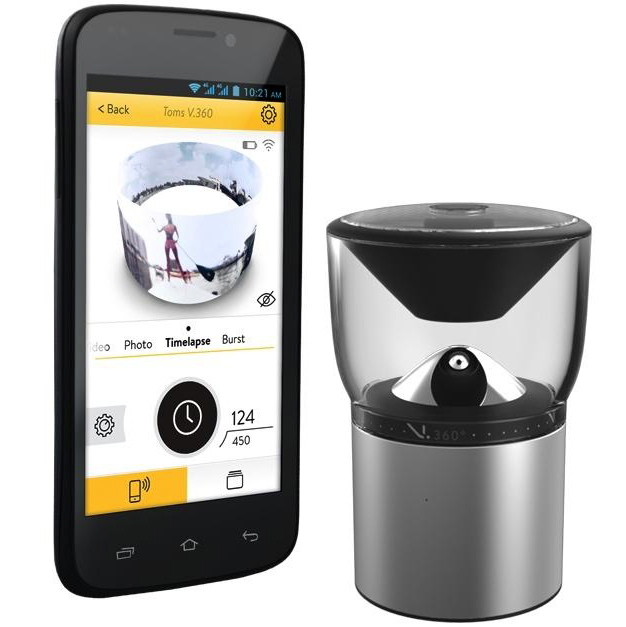 The Bublcam and the Panono capture 360 x 360 spherical images, while the 360cam and the Centr capture 360-degree panoramic images on a single axis. Similarly, VSN Mobil’s camera rotates 360 degrees around itself on the horizontal axis.

“Unlike the 360cam and the Centr cameras, the V.360 uses a single lens to capture a panoramic image in HD quality, and no image stitching is required — VSN Mobil says this is an advantage over competing products,” reports Digital Trends.

Despite company claims, the V.360 is not the first 360-degree camera to shoot in 1080p. “The palm-sized Centr and Kickstarter-funded Giroptic both already capture full HD video in 360 degrees,” notes Tom’s Guide. “But VSN says its approach delivers video and images of higher quality without stitching or distortion. The V.360 uses three lenses and mirrors to shoot forwards, backwards and sideways all at once. Centr has four independent sensors and an engine that stitches together those four feeds into one.”

According to the press release, the V.360 is powered by a Qualcomm Snapdragon 800 processor that helps capture and encode “a 360 degree image at higher frames per second and lower latency because all of this work is done right on the camera, not off in the app.”

Video and images can be managed and shared via a companion app available for iOS and Android. The V.360 camera also features Wi-Fi and Bluetooth 4.0 connectivity, microSD for storage and HDMI for streaming to TV, and built-in GPS, barometer, accelerometer, and altimeter.