Battery Material Could Hold Charge for Years, Even Decades

Researchers from the University of California at Irvine have found a new battery material that could possibly hold a charge for decades. While studying fragile nanowires, a PhD candidate on the research team decided on a whim “to switch the liquid electrolyte surrounding the nanowire assembly with a gel version,” reports Smithsonian. To the team’s surprise, the gel capacitor initially ran for 30,000 cycles and kept going for a month. Although still experimenting, the team believes the thick gel reduces the nanowire’s fragility, a solution that could prove revolutionary for commercial batteries.

“If you could get 100,000 cycles out of a lithium ion battery it might mean you never need to buy two of them,” said Reginald Penner, chemistry department chair, overseeing the research. “We’re talking about a lifetime of 20 years, maybe even longer than that.” 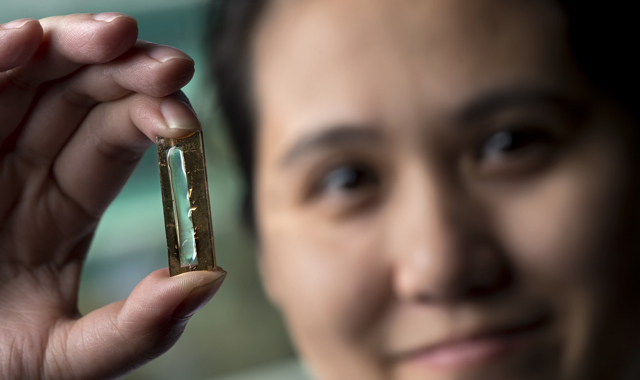 If the nanowire-based tech allows batteries to be recharged hundreds of thousands of times, the battery would likely outlive most CE devices such as laptops, tablets and smartphones. The technology could also prove vital to automobiles and aircraft.

While nanowires are conductive, they are typically thousands of times thinner than a human hair strand and, as a result, very fragile. In lithium ion batteries, they typically become brittle and crack.

“UCI researchers have solved this problem by coating a gold nanowire in a manganese dioxide shell and encasing the assembly in an electrolyte made of a Plexiglas-like gel,” according to UCI News. “The study leader, UCI doctoral candidate Mya Le Thai (pictured above, courtesy of UCI News), cycled the testing electrode up to 200,000 times over three months without detecting any loss of capacity or power and without fracturing any nanowires.”

“The coated electrode holds its shape much better, making it a more reliable option,” Thai said. “This research proves that a nanowire-based battery electrode can have a long lifetime and that we can make these kinds of batteries a reality.”