AWE: Grandfather of VR Seeds an Industry, Calls it to Action

In a wide-ranging keynote at the Augmented World Expo tradeshow this week, Tom Furness, a pioneer in human interface technology, traced his career innovating in virtual reality and announced the formation of the Virtual World Society. Often called a grandfather of VR, Furness’s groundbreaking work includes developing the first VR flight simulator, first VR consumer product and first retina display. His latest vision is for a network of labs where young creatives and technologists turn their talents to solving Earth’s urgent environmental and social problems.

Furness spent the first part of his career at Wright-Patterson Air Force Base solving the mismatch between machine’s increasing ability to generate useful data and man’s limited sensory and cognitive bandwidth to process it. 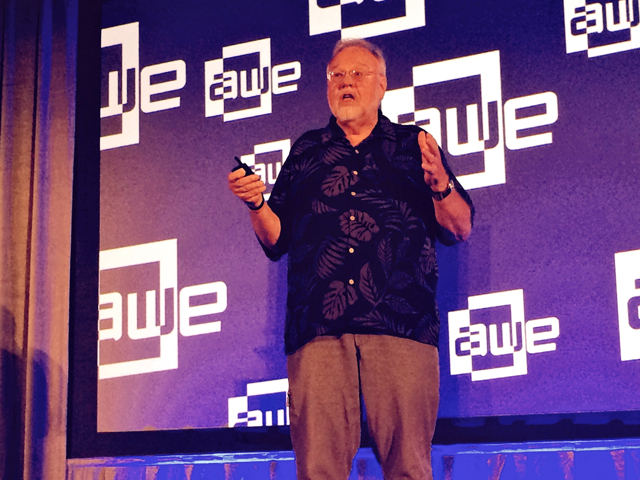 A paradigm shift in using size and placement to highlight information and remove clutter led to developing the first virtual cockpit in a VR helmet — with head tracking. It enabled pilots to consume data generated by more than 50 computers about what was happening outside and inside their cockpit, all the while pointing the aircraft’s nose in the right direction.

Subsequent iterations included the helmet super cockpit with its fusion of exocentric and egocentric points of view in one-to-one registration, binocular eye tracking, speech recognition, bright screen and wide field of view — many of the same features touted by today’s AR glasses and VR HMDs nearly 20 years later. Another paradigm shift led Furness to integrate touch as the means by which pilots communicated with these objects in virtual space.

Deciding “to turn swords into plowshares,” Furness left the military to found the Human Interface Technology Laboratory at the University of Washington. There he developed the first consumer VR device to watch “The Oprah Winfrey Show” while walking. Consumers didn’t buy it, but dentists did.

“It was transformational,” said Furness, “and led to new ways of dealing with pain.” It also led Glastron, eMagin, Myvu and other manufacturers to tap his patents for a host of new consumer HMDs.

However, the patent for another of Furness’s innovations during that time period expired, one for which he received the coveted Discover Award for Technological Innovation. It was for developing the Virtual Retinal Display, one of the technologies driving the soon-to-be released Magic Leap, according to Furness.

Now Furness wants to create spinoff labs that bring together talent from art, drama, technology, zoology and other disciplines to fight hunger, AIDS and environmental degradation.

“Things used to be easier,” Furness wrapped up. “We could sail in the breeze and see the destination. Now, we can’t see the horizon anymore, we don’t know where we are going… We are intoxicated by technology and it’s taking the lead. We are in the future. All we can do is just be. Because things are changing so fast, we need a new sextant.”

Where is that sextant? According to Furness, “It’s in the heart.”