Apple TV Claims More Than Half of Streaming Devices Market

Frost & Sullivan’s newly released report on the size of the Consumer Video Devices Market suggests that sales numbers indicate Apple owned 56 percent of the streaming devices market in 2012, with Roku close behind at 21 percent. TiVo has the next largest base of users. And while Google remains committed to competing in this space, devices based on the Google TV platform have experienced little commercial success so far.

“Apple accounts for the majority of sales by far, despite offering relatively narrow content access — this is not (yet) a market being driven by the value proposition of a streaming TV experience,” according to StreamingMedia. “Apple TV’s AirPlay feature was strategically crafted to simplify the process of transferring laptop and tablet displays to a TV screen, and it is AirPlaying — not OTT streaming — that is the primary reason for purchase of Apple TV devices.” 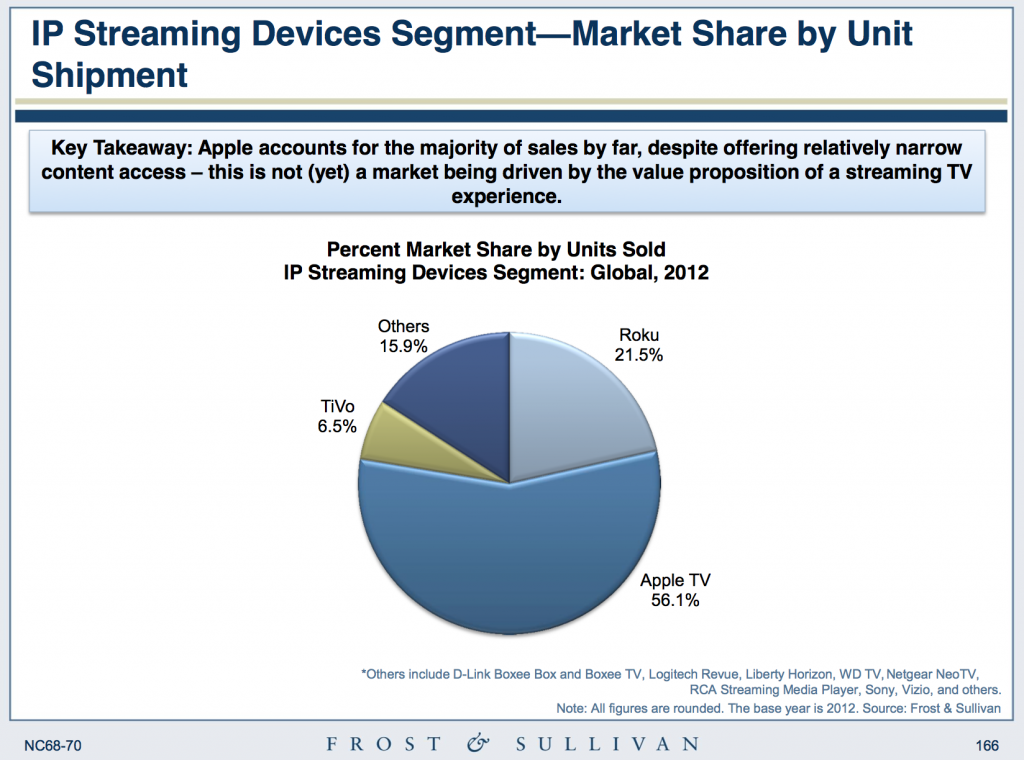 “Roku is the second largest vendor in this space and is driving growth through a strong lineup of content as well as through a series of agreements with pay TV vendors such as Time Warner Cable. The long-term potential for this segment does remain uncertain. It is important to note that while current growth rates are high, the total installed base of $99 streaming boxes is quite low.”

The market has still failed to find mainstream momentum. Only Apple and Roku have surpassed the one million unit mark in yearly shipments. TiVo has “the next strongest installed base of users, making them a strategic option for pay TV service providers looking to establish an IP streaming device partnership,” notes StreamingMedia.

The report details market share and sales numbers for tablets, phones, smart TVs, set-top-boxes, game consoles and IP streaming devices. It specifies statistics for world regions and features projections for the next five years. It is available to subscribers of Frost’s Digital Media research service.