Apple plans to make it easier for viewers to watch its TV app, and boost its use on Apple TV, iPhones and iPads. Rather than make users purchase subscriptions through various apps in its App Store, Apple will sell subscriptions to some of these services directly through its own TV app, and also centralize streaming from its own app, rather than through third parties. Sources say the feature will roll out next year. Apple has focused on growing its services business, which is slated to generate $50 billion a year in revenue by 2021.

Bloomberg reports that, “Apple is positioning the TV app much like Amazon does with its Channels program, which allows customers to add subscriptions for HBO, Starz and Showtime to Amazon Prime Video.” All those premium channels “have credited Amazon with helping them boost new online services by marketing them to its base of more than 100 million Prime customers.” 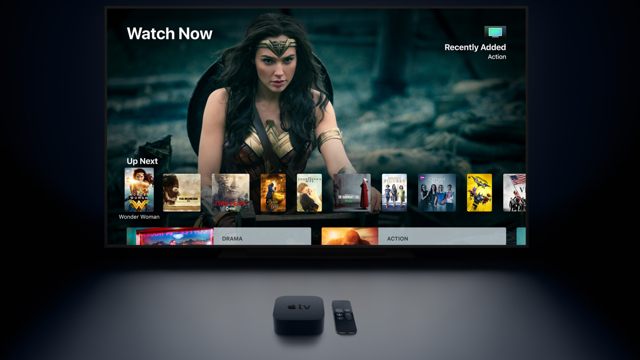 For Apple, iTunes has been a boon, turning it into “one of the biggest sellers of movies and TV shows … but [the company] has largely missed out on the wave of on-demand services now replacing the online sale of individual titles.”

Apple has considered “different ways” of improving its standing in the online video industry, even as its rival Alphabet operates “Netflix and YouTube … the two largest online video services in the world outside of China.” Among Apple’s considerations have been “creating an online package of live TV channels,” and creating “a package of premium channels like HBO, Starz and Showtime for a discounted price,” but a lack of network enthusiasm scotched the latter deal. Instead, Apple debuted its TV app in 2016, “pulling together content from existing apps.”

The Apple TV box, which Steve Jobs once dubbed a hobby, “trails rivals Roku, Google Chromecast and Amazon Fire TV, according to research firm eMarketer.” Apple’s interest in services is pegged to slowing sales of iPhones. Services sales “climbed 31 percent in the most recent quarter, reaching a record $9.2 billion.”