Amazon is taking pre-orders for Element’s Fire TV Edition sets, to ship in June at the same time other retailers get them. Amazon, Element and Westinghouse announced Fire TV-based television sets at CES 2017, and the companies are now revealing prices and other details. Element will offer its 43-inch Fire TV for $449 retail, a 50-inch for $549, a 55-inch for $649, and a 65-inch for $899. The TVs support 4K video and offer a quad-core processor, 3GB of RAM and 16GB of internal storage for apps, specs that are meant to future-proof it.

Variety quotes Amazon vice president of smart TVs Sandeep Gupta as saying that the TVs will “have a longer life cycle than a regular smart TV.” The interface of the TV is the same as that of a Fire TV box or stick, except there are extra tiles that “let users switch their input devices to access game consoles, Blu-ray players and cable boxes.” 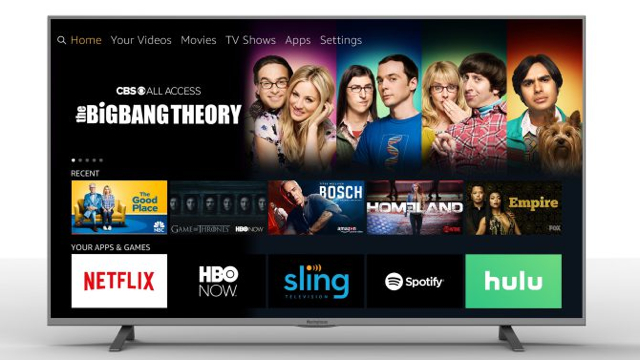 The TV sets “also directly integrate over-the-air broadcast TV,” and users get a 15-day programming guide and universal search across broadcast networks; the user can switch to live programming via an Alexa voice command. Gupta, who calls Fire TV Edition “a true cord cutter solution,” says “the ultimate goal was to integrate with streaming TV providers like Sling TV and PlayStation Vue as well.”

TechCrunch, which reports that the new Fire TVs are being advertised on Amazon’s homepage, says the company “no doubt sees the 4K set as a conduit for introducing the company’s media play into users’ living rooms.” The affordable price for the 43-inch model, it says, “is in keeping with the company’s long-standing model of undercutting the competition.”

Among the “inherent advantages” of the Fire TV over its less expensive media players is “the ability to incorporate external inputs.” TechCrunch opines that, with the Fire TV, “Amazon’s taking Roku on directly yet again,” and “likely marks the first of a number of third-party devices set to launch with the company’s offering built directly in.”