E-commerce giant Amazon launched a new delivery system this week called Amazon Flex. The Uber-like model offers individuals with their own vehicles and an Android smartphone the opportunity to deliver packages for $18-25 per hour. Drivers have the option of two-, four- or eight-hour shifts. In addition to a car and an Android phone for managing deliveries with the Flex app, drivers must be over 21 and pass a background check. The new system, initially rumored back in June, works with Amazon’s Prime Now service, which offers members one- and two-hour delivery on items.

The approach is similar to other notable “gig economy” services growing in popularity, such as Postmates and Uber, that provide workers with new flexibility and the ability to set their own schedules. 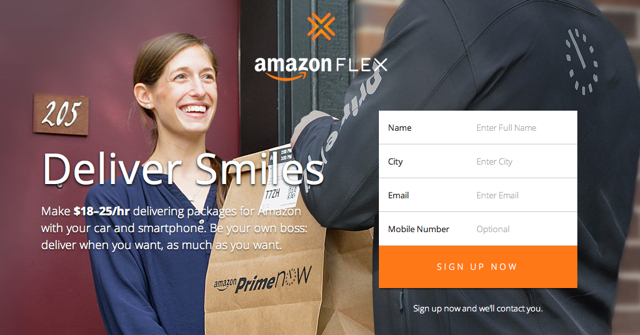 However, some of these companies “have come under fire for not providing benefits such as health insurance, paid sick days, and workers’ compensation for work-related injuries and lost income,” reports Digital Trends.

A class-action lawsuit has been filed in San Francisco to push Uber toward categorizing its drivers as full-time employees rather than independent contractors (which could be why there are no immediate plans for Amazon Flex to launch in California).

Meanwhile, “Flex is up and running now in Amazon’s home city of Seattle,” notes DT, “though the company is also looking for part-time drivers in Manhattan, Baltimore, Miami, Dallas, Austin, Chicago, Indianapolis, Atlanta, and Portland in preparation for launches in these cities, too.”

For more information, check out the Amazon Flex page, which includes a signup window for those who may be interested in moonlighting.

However, Ars Technica points out that some key questions remain unanswered: “How exactly do drivers maximize the amount of money they make per hour? What happens if a driver fails to deliver a package within the Amazon Prime Now hour? How many drivers has the program already signed up?”