A Twist on Wearables: Two Examples that Use Data Differently

Wearables have mostly been discussed in terms of the data they provide — be it steps walked, calories burned or blood pressure measured. Two examples showcased by The New York Times tech writer Eric Taub at CES do more than simply serve data to the user, differences that help to define this new category. One uses sensory information and a rhythmic feedback to change people’s level of happiness and energy; a second was developed by academics, medical centers and Apple to conduct a global medical study on heart health and exercise.

Theoretical physicist/hardware tech designer Fotini Markopoulou wondered what it would be like to create a wearable that actively impacted how people feel. “How we feel mostly comes from our senses,” she said. “So you can make technology that affects your senses and changes how you feel.”

The resulting wristband device, doppel, has a double beat, much like a heartbeat. “Your body responds to rhythms,” explained Markopoulou. 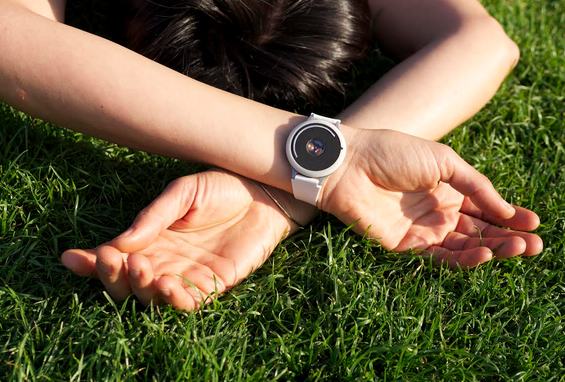 “We came into wearables by seeing you could make one that affects people actively,” she added. “It’s a different direction than those that measure things and then serves you data. Data is amazing, but we don’t process data, we process experiences. The wearable should service the experience, with data as the background.” For now, doppel takes up “precious real estate on the wrist,” she admits, but the company is looking into other form factors.

Cardiologist Euan Ashley, MD, PhD, who is also associate professor of medicine & genetics at Stanford University, set out to create an altruistic app, with Apple’s help, focusing on cardiovascular health. “We wanted to create a wearable that the medical community could use for research,” he said. “The most powerful drug we have for cardiovascular health is exercise, second is diet.”

The app — My Heart Counts — was launched as a clinical research project, capable of asking and receiving consent from consumers engaging in the app’s six-minute cardiovascular health program. “In the first week we launched this, 6,000 people did it,” said Ashley. “It’s a new world.” The app is about to be launched in different countries.

“Based on an initial 7-day period of monitoring. 100,000 people have done it and 50,000 have consented to the study,” Ashley explained. But he notes that the wearable walks a fine line with the FDA. “If we gather data and provide it to you, it’s health information,” he said. “But if we feed the data into an algorithm and give you personalized advice, then the wearable becomes a medical device and needs approval by the FDA. But we’re embracing digital health as much as possible and interested in going through that process to become medical gear.”

How the medical community learns from the study and takes it to the next phase is up for discussion. As Ashley and his team work on their app’s next version, Markopoulou notes that “a lot of wearables are coming from different directions.”

“There are many technologies out there,” she said. “In the future, they will begin coalescing. We’re trying to bring in engineering that effects your sensing, rather than data. How this blends with what other people are doing remains to be seen.”