The Internet of Things Brings Benefits, Risks and Public Policy

Consumer taste, technology development are two of the forces impacting the growth and direction of the Internet of Things. A group of experts focused on policy issues surrounding IoT’s evolution at CES. Moderator Alan Davidson, director of digital economy for the Department of Commerce, reports that, about seven years ago, the number of Internet-connected things surpassed the number of people on the planet. “By 2025, this is an area that will have an economic impact of $4 to $11 trillion on the global economy,” he said.

FTC commissioner Julie Brill described what the future of the IoT will look like. “The Internet will disappear through it and devices will just start to be connected, the way we think about electricity now,” she said. 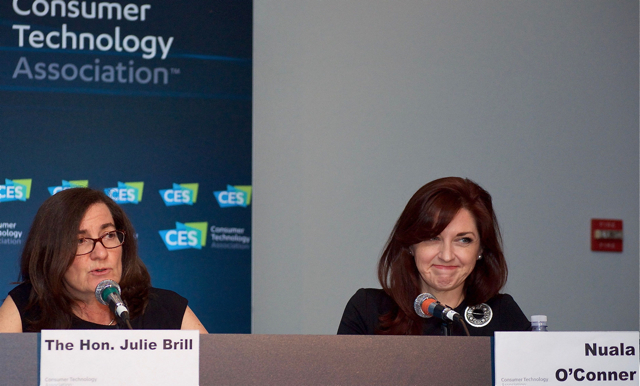 The potential benefits of the IoT are huge. Germany’s State Secretary, Federal Ministry of Justice and Consumer Protection Gerd Billen enthused about the ability of IoT to combat climate change. “Connecting production of energy will give us many more opportunities for energy efficiencies,” he stated.

Center for Democracy & Technology president/chief executive Nuala O’Connor is “most excited about opportunity to serve mankind,” with solutions for healthcare and the environment.

“What I find exciting is the potential of IoT to let people live in the world more easily and conveniently — especially people with disabilities,” explained Samsung Electronics America executive John Godfrey. “If Safeway can deliver milk to a blind person, that will give them independence.”

But the panelists were equally troubled by the potential risks to personal security and safety. Brill points out that, when the Internet becomes invisible, “consumers will not have the usual tools they have now to understand the data about them and how to control it.”

“The network connecting these devices will be more sophisticated which will add to the security challenges,” she said.

Many would agree with O’Connor’s concern “about the level of granularity of the data that will be collected.” “The question will always be, who is responsible and who is reliable?” said Billen. “It would be nice to have a refrigerator that orders milk, but once in awhile I’d like to drink beer. Who has control over the decisions?”

Brill brought up the risks of physical safety with regard to IoT. “There have been studies of connected cars and medical devices being hacked,” she said. “Security issues don’t just relate to data but to safety issues, and patching vulnerabilities — not just coming out with a new version — will be important.”

Improvements in device hardware will go a long way in blocking hacker attacks, said Godfrey, and that’s something smaller developers can take advantage of when economies of scale make the chips become cost effective. What he’s worried about is fragmentation of the ecosystem.

“We all need to work hard to have an open, interoperable platform,” he said. “Otherwise, all these benefits won’t happen if we don’t achieve economies of scale that will make it affordable for everyone.”