Online photography community 500px is launching a commercial licensing marketplace called Prime that plans to charge licensing fees starting at $250. 500px says Prime is different from other licensing services because regardless of the license or who purchases the images, member photographers will earn 30 percent of proceeds for each photo sold. 500px is hoping “to fundamentally change the way photos are licensed” by “changing the way photo licensing companies work with photographers.”

“We are using the power of the 500px community to give buyers insight into how photos will be received and perceived before licensing them,” explains the 500px Blog. “Imagine searching images by potential vitality, hero status and visceral reaction. This is revolutionary and something only 500px can do.” 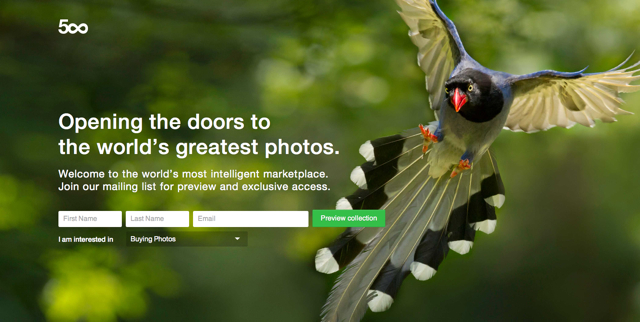 According to the 500px site, the community currently has more than 3 million registered users. Prime aims to serve its members who may not have the time or financial means to market themselves, and may not be familiar with the legalities of licensing images. Prime will essentially serve as an agency to connect photographers with the top buyers in the commercial licensing space.

“500px has been popular with both amateur and pro photographers as an outlet to share their work, as well as connect and collaborate with one another,” reports Digital Trends. “It might seem fishy for the service to now make money off this community and its creative process, but 500px Prime is actually a separate, opt-in marketplace that users have to sign up for. And, 500px says that it’s something that users have requested, and it could give greater exposure to a photographer’s work. (Flickr does something similar with Getty Images.)”

“Of course, many believe that self-marketing is still a much more lucrative way to make money off of your photography — after all, 100 percent is a lot more than 30 percent,” notes PetaPixel. “But for those photographers who don’t have the time or maybe have never even thought of making money off of their popular 500px profile, 500px Prime could be a viable option.”