Google Cardboard is no longer the only inexpensive VR headset around. From Oakland, CA-based hardware collective Next Thing Co. comes Pockulus, a $49 portable game console that consists of a palm-sized computer and 3D-printed facemask. The tiny computer that runs Pockulus is CHIP, which was the company’s successful seller at $9 per unit. The idea to repurpose CHIP as a VR controller was an April Fool’s Day joke that is now a real product. It requires some DIY, mainly 3D printing the bezel that fits the display on the face.

Wired reports that the April Fool’s Day joke, an annual rite for many Silicon Valley companies, was to poke fun at people who strap devices on their faces. But somewhere along the way, the joke became a product, and now Pockulus is now one of the least expensive VR headsets available. 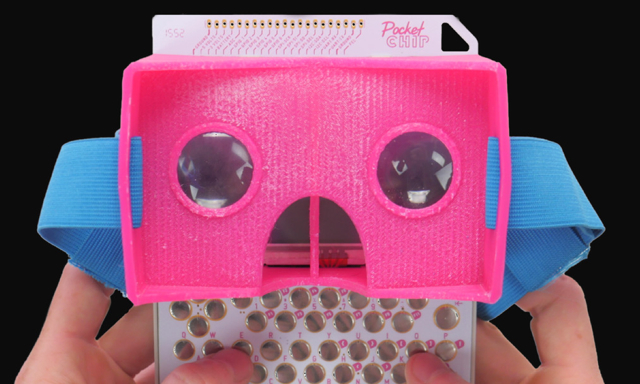 Pockulus is based on another Next Thing invention, PocketChip, which combines the Linux-based CHIP computer with a 4.3-inch screen and QWERTY keyboard. CHIP also has a Web browser, word processor, built-in Wi-Fi, storage, a battery and programs to make music and games.

The free plans to print the facemask are available on GitHub, which means anyone who had previously bought a PocketChip could transform it into a somewhat kludged-together virtual reality headset.

Currently, people are using Pockulus to play “homebrew 3D games, as well as some 3D games that Nintendo made in the mid-1990s for its Virtual Boy system.” In fact, although Virtual Boy was Nintendo’s least successful system, a group of enthusiasts have continued to code games for the system — and all of them are compatible with Pockulus.

“Homebrew Virtual Boy games are really just the beginning and proof of what’s possible,” said CHIP team member Richard Reininger, who noted that CHIP is “completely open source and supports the latest version of Linux.” “Armed with the knowledge that Pockulus does in fact work, we’re really excited to see what the people do with it.”

Among the “crazy things” that hackers have done with it are to make a $10 version of the Amazon Echo or an old Teddy Ruxpin doll that says nutty things. With the Internet of Things, says Wired, many DIY makers see it as “a fount of possibility.” Who knows what’s up ahead since the company has shipped thousands of CHIP computers to “homebrew builders.”