If Wells Fargo is right, the traditional password will be gone in five years. To prepare, the company has been mentoring startup EyeVerify in an accelerator program since 2014. This July, Wells Fargo will debut EyeVerify’s software to corporate clients. Those executives authorized to use commercial bank accounts will be able to use their iPhone camera to take a selfie, and the Eyeprint ID software built into the bank’s mobile app will read their eyes’ veins and other markers to match with a stored template.

The Wall Street Journal notes that biometrics in the financial services industry is expected to boom. Market intelligence firm Tractica, which says banking will continue to be the main use case, says its current value of $126 million in hardware and software will vault to $2.2 billion by 2024. Wells Fargo tested voice and facial recognition technologies but neither of them worked consistently enough; background noise, low lighting and glare prevented correct identifications. 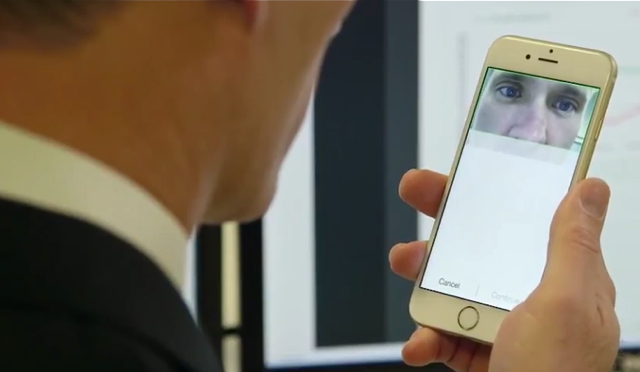 “If it fails a lot, customers won’t use it,” said Wells Fargo wholesale Internet services head Secil Watson. She notes that Eyeprint ID is more reliable and more private. “You look directly at the smartphone,” she said. “Customers wanted to have as discrete an experience as possible so as not to be recognized by others as accessing a bank account.”

Watson reports that early version of the EyeVerify product were less than ideal, requiring users to snap photos looking at an angle, to better capture the vein structure of the white of the eye. Wells Fargo technologists worked with the company to create the current algorithm, which now gives the bank a competitive advantage. Wells Fargo has not disclosed how much it invested in EyeVerify.

Wells Fargo isn’t alone in searching for ways to use the human body as a security gatekeeper. American Express and J.P. Morgan Chase, among others, have also experimented with facial and fingerprint recognition. But traditional passwords aren’t going away anytime soon. They will linger, says WSJ, “until biometrics can be used easily not only on mobile devices but desktop and laptop computers still prevalent in corporate offices.”

Until then, Wells Fargo will continue to offer a password option for consumers and corporate customers, according to Watson.