At CES 2018 in Las Vegas last week, Vuzix debuted the Vuzix Blade, AR smart sunglasses that are the result of years of research and are based on the company’s proprietary waveguide technology. The glasses work via a tiny LED projector in the temple area of the glasses that shoots an image sideways into the lens. The lenses are laser-etched with dots at different depths that “catch” the projected image and illumine it in the wearer’s field of view. When the AR functionality is turned off, the glasses look ordinary.

Digital Trends reports that, “the same tech appeared in last year’s AR3000 smartglasses, but Vuzix marketed those more toward businesses.” The user will see the “ghost effect” of “something seen only in one eye” when the display is turned on, but when the user “looks squarely at the image,” it comes into focus. 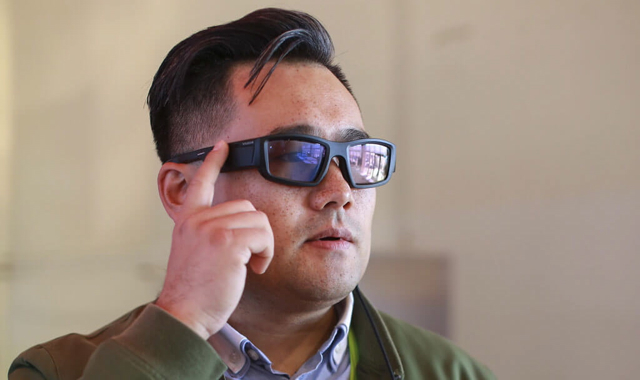 Although Vuzix wouldn’t reveal the per-eye resolution, it does say that it is “comparable in resolution to the HoloLens.” In any case, “the images unquestionably look better than anything we’ve ever seen on Glass.”

Vuzix has an app store with offerings from Spotify, Pandora, Netflix and others, many of them already released for the company’s previous AR glasses. The user navigates through the apps with “an intuitive, touch-sensitive pad on the temple: swipe to navigate, tap to select.” Downsides are battery life that can be “as short as 90 minutes in extreme use-case scenarios, like watching movies.” 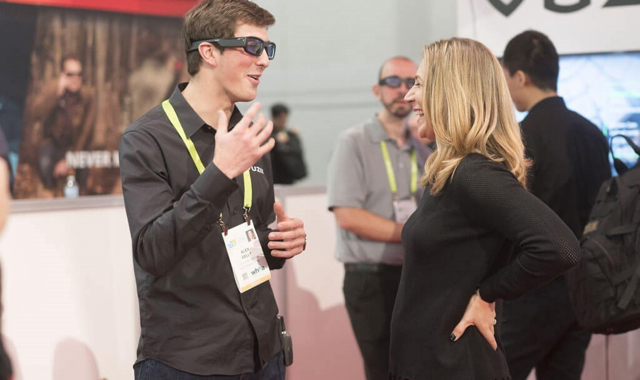 The Vuzix Blade develop kit currently costs $1,997, but Vuzix, which owns the patents for the display may also license the glasses to other companies.

TechRadar reports that it named the Vuzix Blade AR Smart Sunglasses as Best AR at CES 2018. Vuzix president/chief executive Paul Travers, who said the company was honored by the acknowledgement, noted in the press release that, “the feedback has been incredibly positive and is resulting in a significant inflow of business and strategic partnership opportunities with some leading organizations from around the globe.”