The United States Patent and Trademark Office granted leading aircraft manufacturer Airbus a patent in August for headrests that include helmets attached to a carrier. The headrests will relieve passenger stress by providing entertainment in addition to “sensorial isolation with regard to the external environment.” They will play immersive multimedia content on glasses with display screens that are capable of “holographic projection mode,” according to the patent. 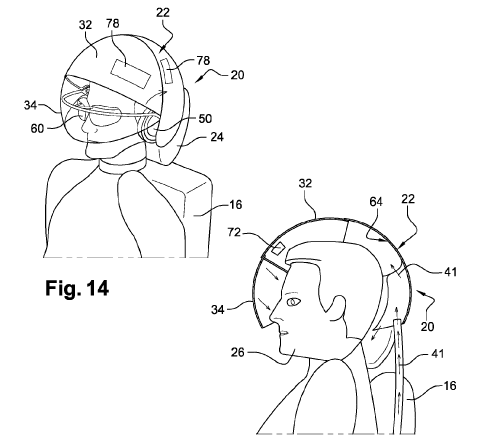 The self-contained audio-visual experience provided by the helmets “can be more or less pronounced according to the configuration of the helmet and the functionalities which are associated with it,” explains documents posted on the USPTO database. “This isolation allows the passenger to better profit from some of the distractions offered, for example listening to music, watching films, etc.”

The headrest enables the passenger to watch and listen to 2D or immersive 3D videos, whether provided by Airbus or streamed from their own devices. It “allows the passenger to follow a high-definition video, for example by holographic type projection onto the inner face of the visor or, again, by the use of glasses,” according to the patent.

Airbus’s technology also includes tools for those sorry passengers who need to work during their flight. “The headrest is arranged to allow office work, especially in head up position.” There is “a virtual keyboard appearing in the image diffused by the helmet” to be operated via a pad interface and motion capture gloves.

According to the Airbus website, the company sees a “seamless relationship between people and technology” while they fly that includes a “virtual shopping wall… that projects clothes directly on to passengers.” Perhaps Airbus also has those capabilities in mind when it applied for its new patent?

“Don’t expect the helmets anytime soon, though,” suggests Wired. “This is merely a patent filing, and an Airbus rep says the company isn’t doing anything to bring the idea to market; it’s just protecting its IP.”