University is First to Recognize Video Gaming as Varsity Sport

A private university in Chicago is leveraging the growing popularity of eSports to become the first U.S. school to formally recognize electronic gaming as a form of collegiate athletics. Starting this fall, Robert Morris University-Illinois will consider “League of Legends” a competitive varsity sport, and will offer athletic scholarships to star players valued up to 50 percent the cost of tuition and room and board. The university is currently recruiting student gamers for the first year of competition.

“League of Legends” is a multiplayer battle arena game that was developed by Riot Games. In January, it logged more than 27 million players per day.

“RMU will join the Collegiate Star League, made up of 103 institutions of higher learning and compete against other universities including Arizona State, George Washington and Harvard,” explains the press release. 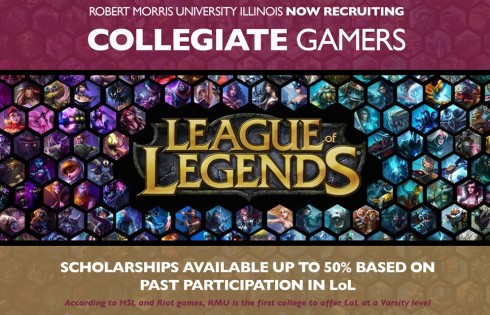 “Currently there are over 750 schools in 46 states and eight Canadian provinces that participate in League of Legends High School Starleague (HSL),” the release adds. “Robert Morris University seeks eSport athletes with experience in the HSL or similar for their inaugural competitive season.”

According to Kurt Melcher, associate athletic director, RMU “has always been at the forefront of providing opportunities for a diverse student population with different interests and skills. ‘League of Legends’ is a competitive, challenging game which requires significant amount of teamwork to be successful.”

Melcher provided the following tips to The Washington Post regarding how to get recognized as a potential candidate for scholarships: