A new study from Accenture found that as our finances move to new digital platforms, younger generations place more trust in Internet and retail brands than they do with traditional banks. The study found that individuals between the ages of 18 and 34 would consider doing their banking entirely online while also getting their financial services from non-traditional providers. Topping the list, 46 percent of respondents in this age group said they would be likely to bank with PayPal. 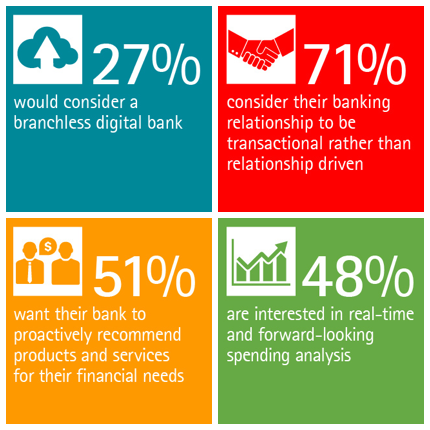 “That shouldn’t be too much of surprise since PayPal is already a dominant player in payment services,” reports GigaOM. “But Google, Amazon, Apple and Walmart rounded out the top 5 list of potential alternate banking providers.” However, the chance of these companies becoming banks is small as the financial industry is much more heavily regulated than their own.

The 2014 Accenture study, which surveyed 3,846 bank customers in the U.S. and Canada, identified four key takeaways:

The study “found that we’re becoming much more comfortable with the idea of ‘branchless’ banking where all transactions, from depositing checks to applying for loans, are conducted in the Web browser, on the mobile phone or by telephone,” suggests GigaOM.

Visit the Accenture site to download the PDF version of its 2014 North America Consumer Digital Banking Survey: “The Digital Disruption in Banking — Demons, Demands and Dividends.”