Slack has plans to evolve its workplace app to become the center of the office’s digital environment, connecting a wide variety of third-party business apps, with the ultimate goal of becoming the artificial intelligence-powered portal to the entire workplace. Head of search, learning and intelligence Noah Weiss described those plans for Slack, currently used by three million people every day in the work environment, and added that the company is also evolving its voice capabilities to become more sophisticated.

According to Recode, “in time, Slack’s underlying AI will understand your role inside a company, anticipate your day-to-day needs and act like a well-trained office assistant.” The many Slack channels in a workplace also becomes a “valuable trove of a company’s collective memory,” that can help teach an AI system about how the company functions. 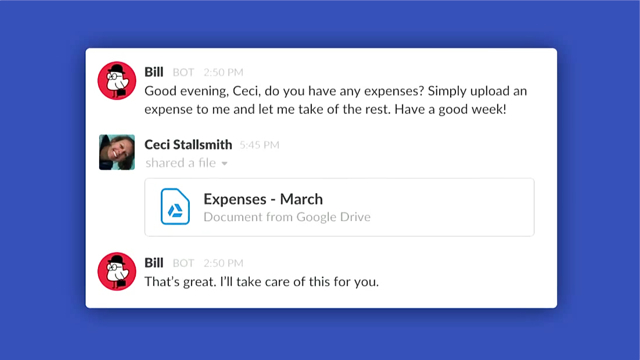 “Workers spend about 20 percent of their time looking for information, or looking for a person who has the information they need,” said Weiss. “And we’ve found that a lot of the questions people have are asked over and over again.”

The strategy is to create a system wherein questions can go from the most basic to much more complex topics, with the idea that “in time, Slack itself will be smart enough to answer.”

“That’s one of our key examples that we’re working on, but it’s too early to show a demo,” said Weiss. It’s worth noting that, with 430 third-party apps, Slack is already valuable as a source of information and tasks such as approving expenses and tracking projects.

Recode predicts that, “as Slack becomes smarter, it will seek out and present you with information that it thinks you might want to know,” which would be “especially useful as Slack scales up to work with ever-larger companies.”

Weiss points out that eventually Slack will “know the people you trust and the topics you tend to care about, and over time it will figure out how to better route information to you.” “It becomes a robot that’s working behind the scenes on your behalf to find things you should know about but might otherwise never see,” he said.