The National Science Foundation just announced grants to build the $30 million Stampede 2 supercomputer which, outfitted with 18 petaflops, will offer twice the power of the Stampede, which debuted in March 2013. Its processing capacity puts it on a par with Cray’s Titan and IBM’s Sequoia (though not as powerful as China’s Tianhe-2). The supercomputer will be available to any researcher with a need for immense processing power, for such applications as atomic and atmospheric simulations.

TechCrunch says the Stampede 2 will be built at the University of Texas at Austin, and quotes Texas Advanced Computing Center director Dan Stanzione that, “the kind of large-scale computing and data capabilities systems like Stampede and Stampede 2 provide are crucial for innovation in almost every area of research and development.” 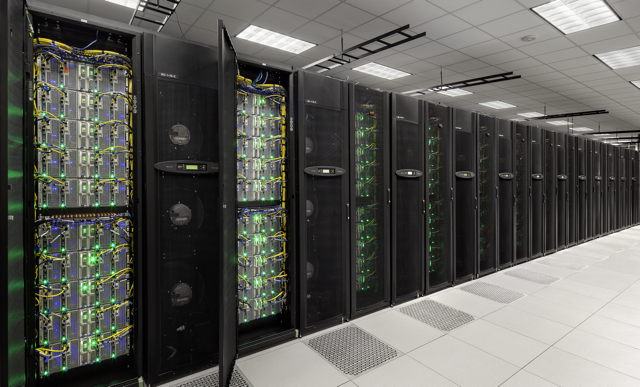 “Stampede has been used for everything from determining earthquake risks to help set building codes for homes and commercial buildings, to computing the largest mathematical proof ever constructed,” he said.

Stampede 2 also features twice the RAM, storage and data bandwidth. As a result, says TechCrunch, “Stampede 2 can shift up to 100 gigabits per second, and its DDR4 RAM is fast enough to work as an enormous third-level cache as well as fulfill ordinary memory roles.”

Stampede 2 will also be “the first serious deployment” of 3D XPoint non-volatile memory, a “holy grail for high-performance storage use cases” that is allegedly faster than NAND but cheaper than DRAM. The need, points out the University of Texas, is acute: in the last ten years, the number of research institutions has doubled, principal investigators tripled and active users quintupled.

The photo above of Stampede is courtesy of the Texas Advanced Computing Center site.