Samsung has committed to integrating artificial intelligence and Internet connectivity into all its products by 2020, even as Google and Amazon beat the South Korean company to market with their AI-powered smart speakers. Samsung’s goal is to have every device from televisions to refrigerators synch with each other and drive demand for its smartphones. Samsung eventually plans to centralize these devices with its SmartThings app, acquired in 2014. It also will include its own virtual assistant Bixby, which debuted last year on its flagship Galaxy S8 smartphone.

The Wall Street Journal reports that, “the AI strategy is so central to the Samsung’s future” that it established an AI Council last year, composed of more than 20 top executives who meet every other month, a rarity for the company which is split into three units. The company is also expanding its AI research, adding centers in Cambridge, U.K., Toronto and Moscow this month, and plans to build an internal team of 1,000 engineers and researchers devoted to AI by 2020. 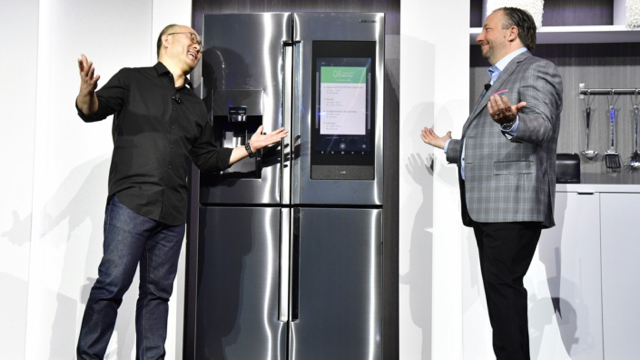 After a delayed release last year, Bixby, which initially had trouble with English-language syntax and grammar, will launch as a speaker in the second half of 2018. Samsung will also release Bixby 2.0 with its Galaxy Note 9, debuting later this year. The Bixby upgrades include the ability to respond to the voices of up to 10 people, and more third-party collaborations, including 500 U.S. partnerships.

WSJ notes that, “the AI push could give Samsung troves of new consumer data, which is relatively uncharted territory for the company despite its ubiquitous product lineup.” The “U.S.-China tech war” could also benefit Samsung, which “has a major foothold in the American market for consumer electronics … [and] also has access to the China market.”

According to ABI Research, the number of global homes using at least one wireless-connected smart home device was 52 million last year and is expected to increase five-fold to 280 million by the end of 2022.