Samsung launched a free radio-streaming service in the U.S. last week, which aims to attract customers for its Galaxy-branded smartphones while taking on the likes of Pandora, Spotify and Apple. The initially ad-free “Milk Music” combines content licensed from Slacker Radio’s catalog of about 13 million songs with music obtained exclusively for Samsung. It differs from other services in that users do not need to log in or even register. The application can be downloaded from the Google Play Store. 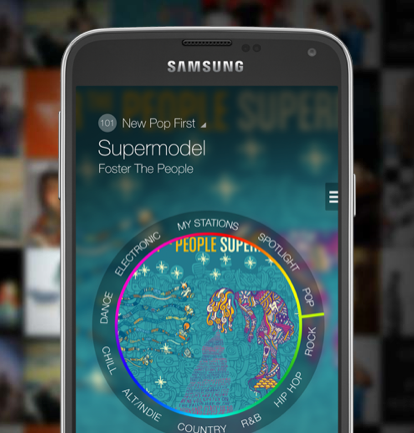 “Milk’s interface was Samsung’s design, something it has been working on for a year,” reports CNET. “The interface harkens back to the analog FM dial of old, based around a circular dial that lists channels around its circumference. Powered by Slacker Radio, the service is meant to start playing immediately, and to play music as you swing around the dial, catching snippets of songs just as you would if you were tuning through an FM band.”

“We’re offering consumers amazing, rich music experiences built around what matters most to them and their lifestyle,” said Gregory Lee, president of Samsung Telecommunications America.

“Like Apple, which is trying to tie users to its devices with iTunes Radio, Samsung’s Milk Music isn’t available on other companies’ devices that use the Android operating system or even Samsung’s own tablets,” reports Bloomberg.

The competition is strong. Pandora has been on the market for almost nine years, Spotify introduced a free ad-supported service in December, and Beats Electronics launched Beats Music in January.

“To stand out, Milk Music includes a unique eight-second caching feature that starts songs instantly as a user scrolls an on-screen dial, which gives tactile feedback while browsing genres and favorite stations,” notes Bloomberg. “The service lets listeners skip through six songs an hour per station.”

“Other services have too many ads, too many interruptions,” suggested Chris Martinez, director of services planning for Samsung Telecommunications America. “Milk Music is instant, intuitive and an entertaining way to dial into signature music, and it’s ad-free.”