Rabbit Hops Into the Game with New Video Chat Program

Startup company Rabbit has created a video chat program in which users can share music and videos in real-time while chatting with one another. Users can have multiple conversations with friends, that all appear in circular bubbles to enhance the feeling of being in the same space together. The new approach by Rabbit could possibly provide competition for other successful programs such as Skype, Apple’s FaceTime, and Google+ Hangouts.

“While Rabbit was launched with the idea of allowing users to meet one another in various public rooms — kind of like wandering through various different conversation circles at a party — it’s found that early adopters tend to be communicating with close friends in private rooms,” reports TechCrunch. 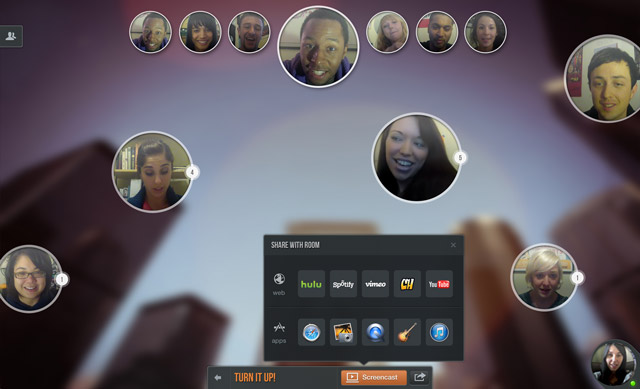 However, the feature that seems to be getting the most attention is the ability to share videos from sites like Hulu and YouTube and music from iTunes and Spotify with friends.

“Morgan explains that while Rabbit captures conversation audio that is fed into your computer when you speak into a microphone and streams that to your friends — as video chat programs usually do — it also captures video and audio directly from your computer so they can be streamed as well,” reports MIT Technology Review, referring to comments made by Rabbit co-founder Stephanie Morgan. “This means you can have conversations while sharing a TV show on Hulu, although the quality of that content on your friend’s end will depend on how good your computer and Internet connection are.”

“And if you do have conversations over streaming content, Rabbit will detect this and respond by automatically lowering the volume of the video, bumping it back up when it determines that the conversation has ended,” explains the article.

The application is now serving a free private beta on Mac OSX with versions 10.7 or higher.