Christopher Nolan fans and moviegoers interested in the upcoming “Interstellar” can get a sneak peek at the galactic world through a 3D virtual reality experience. Participants will get a chance to wear Oculus Rift headsets and virtually explore the film’s spacecraft, which took two months for the team at Framestore to recreate. The Oculus Rift Interstellar Experience is hitting select AMC IMAX theaters in New York, Houston, Los Angeles and Washington, D.C. before the film opens November 7.

The Oculus Rift exhibit invites participants to take a seat in a reclining chair, put on the Oculus Rift headset and headphones, and enjoy the immersive experience inside the Endurance spacecraft. At one point, the technology makes users feel as if they are floating through zero gravity. 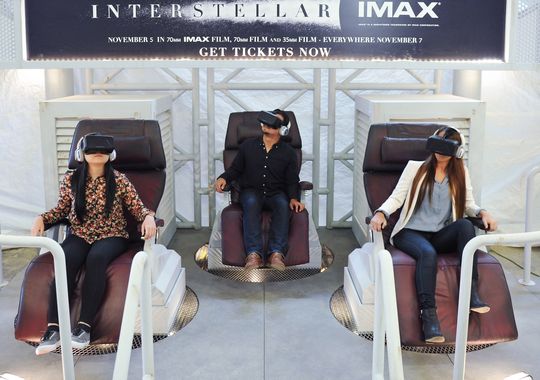 The virtual reality content even has the approval of Nolan himself. “I was impressed with how the experience is able to put you in the cockpit of Interstellar‘s spaceship, The Endurance. It was just like being back on set,” Nolan said in a statement.

Framestore, the visual effects company behind the “Interstellar” experience and the previous “Game of Thrones” VR experience, had a team of 15 to 20 people working on the project.

Megan Wahtera, senior VP of Interactive Marketing for Paramount Pictures, told USA Today that the tour will provide an opportunity for the mainstream public, not just fans at Comic-Con, to try out the Oculus Rift. The Oculus Interstellar exhibit opened Monday in New York. The tour runs though November 19.