Nintendo has begun selling Nintendo Labo, $70 and $80 cardboard add-ons that, with software, let users transform the hybrid Switch tablet/console into a miniature piano, motorcycle handlebars, robot exo-skeleton and other objects. The goal is to appeal to new users outside its core base of hardcore gamers. Nintendo president Tatsumi Kimishima said that only 10 percent of Switch users last year were younger than 16, likely due to its $300 price point, which is more than double Nintendo’s 3DS handheld system.

Bloomberg reports that, “Labo underscores Nintendo’s desire for the Switch to evolve into a more versatile entertainment device, and will most likely be just the first of many such initiatives.” Morningstar Investment Services analyst Kazunori Ito pointed out that, “Switch was loved by Nintendo’s core users because the company brought out all of its strongest characters in the first year.”

“But the second year will be getting more people to try it out,” he said. “That’s the second act for Switch.” 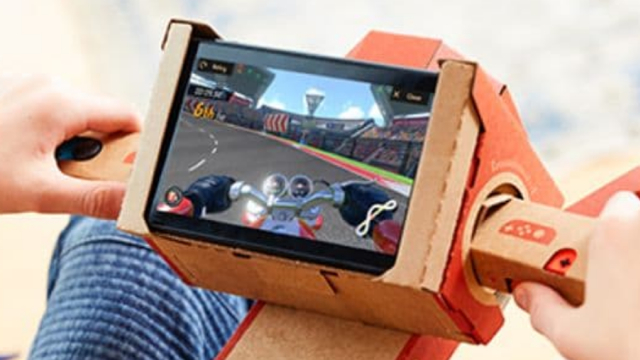 “Nintendo shares aren’t currently pricing in that Labo will be a huge hit,” said Myojo Asset Management chief executive Makoto Kikuchi. “If we start to see indications that it’s selling well, we could see the stock move up a level.”

When word got out that Ohmura Shigyo Co. was the cardboard manufacturer for Nintendo, its shares “jumped more than fourfold in January.” Likewise, Rengo Co., another supplier for the Labo, saw its shares enjoy “a brief rally.” Bloomberg estimates that, “first-year Labo sales are projected to be 3.4 million to 10 million units,” with adoption rates per console seen at 8 percent to 30 percent. According to Macquarie Securities analyst David Gibson, gross profit from Labo is estimated at 4 billion yet ($37 million) for that period.

In addition to price, other reasons why those younger than 16 have been slow to adopt Switch is that it’s too big and that its game titles (“Super Mario,” “Zelda” and “Splatoon 2”) are “more popular with die-hard gamers.” “This is the beginning of targeting the youth market,” said Jeffries analyst Atul Goyal. “It’s a turn from the core gamers to the kids. I think it will be a lot like Lego bricks. Kids will enjoy building it.”

Other Labo products are on the way, said a company spokesperson; it might also be an ideal way to approach virtual or augmented reality. Bloomberg reports that, “in 2016, Nintendo filed a patent application for a VR headset that featured a design similar to Google’s own cardboard-based headset, where a Switch-like display screen is slid into a paper visor.” The company also filed a patent application that “outlined a system that would link the screens of several consoles together to form a single, large playing area.”

Nintendo also just launched a program “to nurture outside developers who can find new ways to play or use the Switch.”