NAB 2015: Why Content Creators Should Care About VR (Panel)

We are past marketing and stunt VR, and now need to move quickly to paid live action VR experiences for the media to succeed, Ted Schilowitz, Fox’s Futurist said during the NMX panel “Why Content Creators Should Care About Virtual Reality” at the NAB Show in Las Vegas this week. Tim Street, board member of the International Academy of Web Television, moderated the panel that also included Cosmo Scharf, the founder of VRLA, Ikrima Elhassan from Kite & Lightning, and Michael Kintner, CEO of 260 Heroes.

Street added that revenue is important, since “your landlord won’t take page views as payment.” He also said the when a new medium comes along, spectacle comes before story. We are rapidly moving past VR’s spectacle phase. 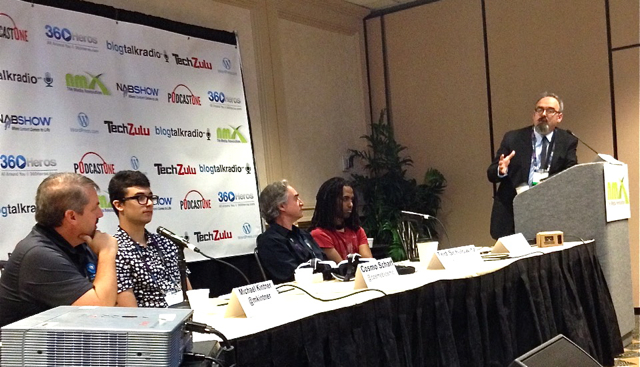 Scharf, who is a student at USC SCA, noted that our memories of VR experiences are different from our memories of TV shows. Because of the heightened state of presence in VR, our brain remembers them as if they were real experiences.

Field of view (FOV) trumps everything when it comes to a good immersive VR experience, said Schilowitz, and frame rate is more important than resolution. Scharf added that audio is more than half of the experience, so any VR demos should always be done with headphones.

Elhassan, who has created many major media company VR installations including The Voice VR Experience, added that everything in the space should obey the laws of physics. VR has its own uncanny valley. As you approach reality, anything that isn’t right instantly takes you out of the experience.

The established video editing tools, such as Adobe Premiere, are being used for VR. Kintner said that creators currently have to live within the technical limitations of these tools until VR and VR-specific tools are developed. For example, 360 Heroes is demonstrating a dome VR experience at NAB. The projector can only project 4K views, but the source material is a 12K view that had to be worked on in 4K chunks.

A fully engaging VR experience doesn’t require haptic feedback or special effects. Schilowitz described a cooking application in Fox’s VR lab. He said that once you start going to the virtual refrigerator for your ingredients and opening cans on the virtual counter top, your mind quickly buys into the experience.

Building the future is about thinking about the past and taking touch points forward, he said. How can the rules of theater, another art form where you cannot control where the audience looks, be applied?

Resources for tracking developments in VR mentioned by the panel include Road to VR, Greenlight VR (and its weekly VR report), and Reddit’s VR thread.