The team behind DJ-focused music service Turntable.fm debuted a new smart-radio service called Piki last week that offers a new take on music discovery. Unlike other streaming music sites such as Pandora, Piki creates playlists based on what your friends are currently listening to. Other developers like Rdio and Fuzz have created similar services, but have yet to make a significant impact. 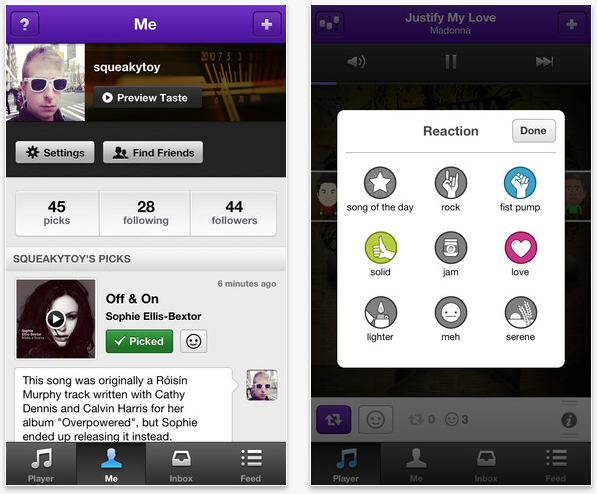 Piki creates “algorithms based on what your friends are listening to rather than grouping songs together because they sound similar or belong to a particular genre,” reports VentureBeat. “It’s structured like Pandora, rather than an on-demand music service like Spotify, and it’s iOS app is available for free. A good comparison for Piki would be a mobile version of ‘Twitter for Music’ service Blip.fm — except with more of a focus on passive listening and discovery.”

The company Stickybits, which produces Turntable.fm and Piki, has been testing the app over the past four months before officially releasing it this past Thursday for iOS devices. Users can pick tracks to listen through a search bar, using a Shazam type feature, or by simply importing songs from their iTunes accounts. From there, users can connect with friends and others through social media sites and the app will create a station from songs recommended by friends.

“Pandora is really good at matching songs that sound like other songs, and it creates this very narrow path of music. That works to some degree because Pandora has hundreds of millions of users,” Turntable and Piki co-founder Billy Chasen said in an interview with VentureBeat. “What we’re saying is that it can be better.”

Even with these features, Piki will have to compete in both the social media and music streaming categories. Services like Pandora and Spotify have created strong followings, and Twitter is releasing its own version of a social music app.

“A lot of music apps have this idea of powering music [discovery] with just your friends, but that’s not the whole recipe,” Chasen added. “You probably have a few friends that have good taste in music, but most of them you won’t really like. It’s time to make some musical friends, which is something we saw happen on Turntable.”