MIT’s Computer Science and Artificial Intelligence Lab (CSAIL), with Israel’s Weizmann Institute of Science, released the prototype of a 3D display technology, for use in movie theaters, that doesn’t require glasses. Other glasses-free 3D displays have been available, most notably with the Nintendo 3DS, but they are designed for use by a single user and only work when the content is viewed at a specific angle. A research paper on the technology, dubbed “Cinema 3D,” will be given at the SIGGRAPH conference this week.

TechCrunch notes that the prototype relies on “a complex arrangement of lenses and mirrors to create a set number of parallax barriers (think of Venetian blinds that show a slightly different set of pixels to each of the viewer’s eyes to simulate depth) that can address every viewing angle in the theater based on seat locations.” 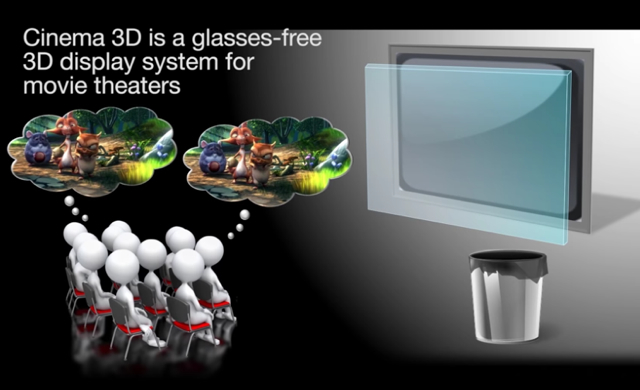 One benefit to developing the technology for a movie theater is that the seats are in fixed locations and people tend not to vary their angle of viewing very much. Past attempts to create this kind of large venue, glasses-less 3D involved splitting the number of pixels displayed to each person, resulting in a much lower resolution. Cinema 3D preserves resolution.

“This is the first technical approach that allows for glasses-free 3D on a large scale,” he added.

Theoretically, the Cinema 3D technology could work in other situations that show 3D visuals to multiple people, such as billboards. For now, however, it is far from a shipping product, an infrastructure of 50 sets of mirrors and lenses and a screen the size of a letter-sized notepad.

“It remains to be seen whether the approach is financially feasible enough to scale up to a full-blown theater,” said Matusik. “But we are optimistic that this is an important next step in developing glasses-free 3D for large spaces like movie theaters and auditoriums.”