Microsoft introduced two new tablets during a launch event on Monday. The Surface 2, starting at $499, is the company’s follow-up to the Surface RT. It features a higher-resoution 1080p ClearType display and Tegra 4 chip. Microsoft is making a play for the content creation market with its $899-$1799 Surface Pro 2, presenting it as a full-fledged mobile workstation. During the demo, Surface GM Panos Panay teamed it with a RED Dragon Carbon Fiber camera to showcase 6K video capabilities.

Studio Daily has a video clip of Panay with the RED and Pro 2, scrubbing through 6K raw R3D footage in Assimilate Scratch Play: “Assimilate VP of business development Lucas Wilson explained: Scratch Play was running 1/4 debayer R3D footage at 6,144 x 2,592 on stage. In a demo area, one Surface Pro 2 was outputting 6,144 x 2,592 R3D Dragon footage and Ultra HD DPX files to a UHD display at 3,840 x 2,160/24p in real time. Another was playing Epic and Dragon footage at 1/4 and 1/8 debayer resolution from a RED Drive connected via USB 3.0.” 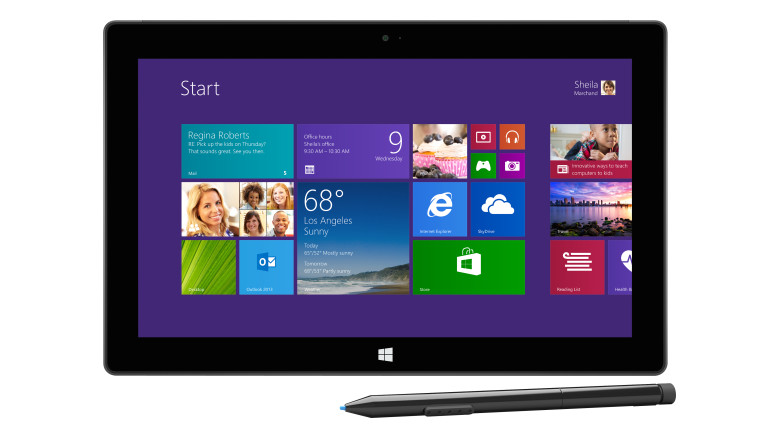 “To have a powerful touchscreen tablet that can output 6K Dragon footage out of Scratch Play into a 4K display on set is pretty cool,” said experienced RED filmmaker Jason Diamond. “I don’t see it as something that’s meant to replace proper storage and proper data-management tools. What it does well is it gives you a full production environment in your hand.”

“While impressive, seeing the demo live on the big screen at the event didn’t really showcase the 6K HD video content fidelity that the RED Dragon produces and how fluid it is to work with on the Surface Pro 2,” adds HotHardware. “Watching it live at a hands-on demo booth really underscored both the high resolution quality of what the camera produces, as well as how comfortable Surface Pro 2 was at handling it.”

Microsoft claims the Surface Pro 2 boasts 50 percent more color accuracy, better graphics, 20 percent faster speed and a 75 percent boost in battery life, a result of the 1.6GHz Core i5 Haswell processor. “The Pro 2’s display has been kept consistent with the original, which means it remains a 10.6-inch 1080p panel, and it’s even been ported to the new Surface 2,” reports Engadget.

“The Surface Pro 2 can also be paired with Microsoft’s new Power Cover to give the tablet 2.5x its standalone battery life or the Type Cover 2, which is now 1mm thinner and backlit,” explains the post.

Microsoft has also made modifications to the kickstand in response to users’ complaints about the old Pro’s awkward angle. The kickstand is now a “two stage affair.”

“As for ports, Microsoft says the Surface Pro 2 is loaded up with support for three USB 2.0, one USB 3.0, mini DisplayPort, Ethernet, audio in/out and, of course, charging,” according to Engadget. “The Surface Pro 2, when docked, can output up to a 3,840 x 2,160 resolution on an external display and is capable of editing 6K video, backing up the company’s repeated assertion that this tablet is actually a ‘full power PC.'”

For the Surface 2, Microsoft says it has “doubled the BUS speed for the Wi-Fi and the memory, and the CPU speed has increased ‘dramatically’ as well,” notes Engadget in a related post. “There’s now a USB 3.0 port on board, a step up from the USB 2.0 connection used on the original. All told, says Microsoft, the new model should run three to four times as fast as its predecessor, and the battery life should be 25 percent longer too (up to 10 hours of video playback).”

Surface 2 and Surface Pro 2 owners will receive one year of free international calling and Skype hotspot access as well as 200GB of free SkyDrive storage for two years.

The Surface 2 will start at $449, with 32GB and 64GB storage options. The Surface Pro 2 (64GB and 4GB RAM) starts at $899 and will be available in configurations of up to 512GB and 8GB RAM. Pre-orders for both began on September 24th. The tablets will ship in 21 different markets beginning October 22nd.