The affordable Raspberry Pi microcomputer — launched three years ago with the modest hope of selling a few thousand units — just passed the five million sales mark. The Raspberry Pi Foundation offers its no-frills Model A Pi for $25 and the Model B for $35. It recently launched the 6x faster Model B Pi 2 with double the memory for only $35. Originally intended as a cost efficient solution for students, the simple microcomputer is now being used to build everything from DIY computers to robotics projects. 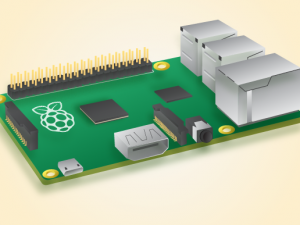 The Foundation’s original mission to get more U.K. school children coding is making progress. However, an unintended result has been the growing popularity among startups, hobbyists, and even larger companies.

According to creator Eben Upton, the Pi has been especially popular in North America.

“The Pi 2 makes a decent entry level PC that much cheaper,” reports TechCrunch. “No surprise that Microsoft is keen to make sure Windows reaches the people Pi will be reaching, announcing it intends to offer Windows 10 to Pi devs for free.”

Since the Raspberry Pi Foundation is a charity, all of its profits go back into R&D, teacher training, educational outreach, and the funding of open source projects.