Harvard University researchers have programmed a robot swarm of more than 1,000 bots that can self-assemble into two-dimensional shapes. The “Kilobots” are roughly the size of a penny, and cost $14 in parts. It takes only a few minutes to put a Kilobot together. In order to program them at the same time, the roboticists use an infrared light from an overhead controller, which gives instructions. Infrared signals also help the robots communicate with each other to create formations. 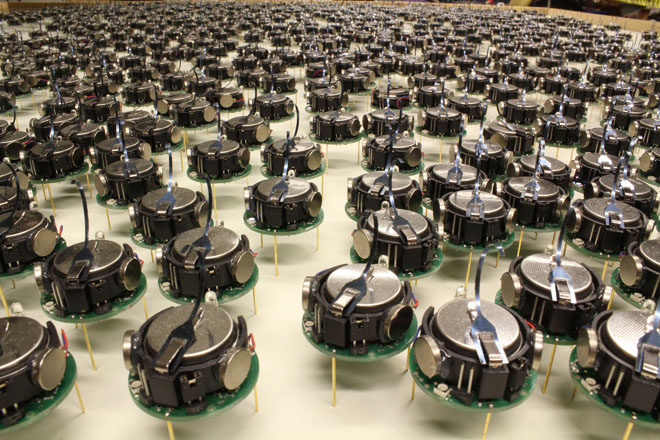 More than 1,000 robots were programmed to gather into specific shapes, such as a star, the letter “K” and a wrench, seen in this video.

“These are some of the first steps toward creating huge herds of tiny robots that form larger structures — including bigger robots,” reports Wired. “Building swarming robots can also help scientists understand collective behavior seen in nature, from bird flocks and fish schools to networks of cells and neurons.”

In order to create this effect, four seed robots communicate with the rest, which travel along the edge toward the seed robots. The robots stop once they are behind another robot, or once they are at the edge of the shape.

Communication between robots is key as they base their location off others’ locations.

Getting robots to work together involves addressing a number of algorithmic and technical challenges. According to the article: “Fancy robots with wheels, odometers, orientation sensors, and cameras can make self-assembly easier, said Mike Rubenstein, the roboticist who led the research team.”