In Reykjavik, Iceland, e-marketplace Aha is using Israel’s Flytrex for the first-ever fully autonomous drone delivery service. Aha, a digital hub for grocery stores, retailers and restaurants, has become one of Iceland’s leading e-commerce sites. Drone delivery is ideal for Reykjavik, which is situated on a large bay, meaning road transportation is circuitous. The Icelandic Transport Authority (ICETRA) conducted a regulatory process enabling Aha to cut a 20+ minute route to four minutes.

VentureBeat reports that, “the drone doesn’t deliver the food directly to a customer’s house” but instead delivers the packages to a landing site on the other side of the bay, where an Aha employee picks it up to complete delivery, at no extra charge to the consumer. At the moment, only one drone operates “from an area near Aha’s headquarters, but more routes are expected to open up following approval from the authorities.” 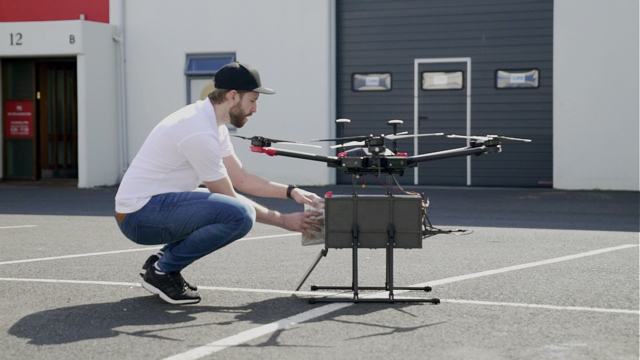 Flytrex, which was founded in Tel Aviv in 2013, “works with companies on regulatory processes around the operation of unmanned autonomous drones and provides a cloud-based drone management system, insurance, and maintenance, among other complementary services.”

“We’re making delivery as instant as ordering,” said Flytrex co-founder/chief executive Yariv Bash. “Drone-based disruption is only taking off, with Iceland as its runway.”

Aha’s ultimate goal is to “deliver all manner of packages on multiple routes in Reykjavik directly to consumers’ backyards.” (Watch the Flytrex video to see the drone in action.)

“We have seen a tremendous increase in our online delivery orders in recent months, especially our retailers’ products, and we expect to see this growth continue in the coming months as consumers experience the much faster delivery times Flytrex drone delivery offers,” said Aha chief executive Maron Kristófersson. “We hope to partner with Flytrex not only in Iceland, but also as part of our marketplace solution overseas.”

Domino’s Pizza is another company turning to drones, in response to “growing customer demand.” That company teamed up with Starship Technologies to trial “little ground-faring robots.” “With our growth plans over the next five to 10 years, we simply won’t have enough delivery drivers if we do not look to add to our fleet through initiatives such as this,” said Domino’s group chief executive/managing director Don Meij.