DJI, whose Phantom drones dominate the nascent market sector, just introduced Inspire 2, an upgrade to its flagship model, and Phantom 4 Pro, an upgrade from last year’s Phantom 4. To showcase its UAV tech, the company has produced a short film using the new Inspire 2. The Phantom 4 Pro introduces multiple crash-avoidance features, including rear and infrared sensors. It can now both fly fast (31 mph) and keep obstacle avoidance engaged; the previous Phantom 4 could only fly that fast in “Sport Mode,” with no obstacle avoidance.

A “return-to-home” feature allows the drone to go back the way it came, also lessening the chance of a crash.

Wired reports that the Phantom 4 Pro is priced at $1,500 if the user attaches her phone or tablet to the remote for a screen, or $1,800 for a built-in display, with pre-orders shipping next week. The new drone gets 30 minutes of flight and has an onboard camera with a 1-inch sensor for 11.6 stops of dynamic range and 20-megapixel still photo capabilities. 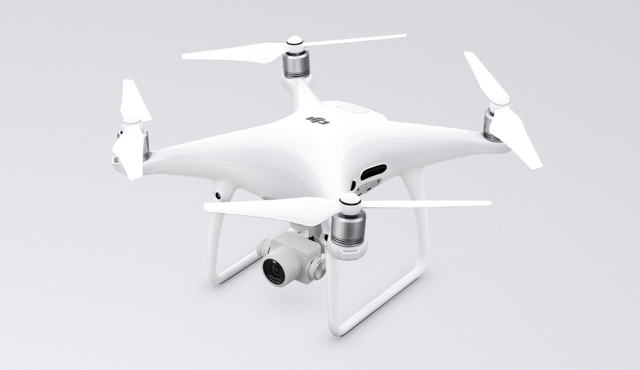 The camera can shoot 4K at up to 60 fps, with bitrates of up to 100Mbps. DJI offers an “option for a more advanced remote with a built-in 5.5 inch touch display,” and promises lower latency for the streaming video. The user can also “draw a path on the touchscreen,” which the drone will then follow — and repeat. Due to the new rear sensors, the TapFly can now go forward and backward for “automatic reveal shots.”

DJI also upgraded the flagship Inspire drone. The Inspire 2, “roughly the same size as the original,” and priced at $3,000, can fly for 27 minutes (up from 18 with the original). Similar to the Phantom Pro 4, Inspire 2 has obstacle avoidance sensors. Top speed is now 67 mph, going from zero to 50 in four seconds.

With regard to camera options, the Zenmuse X5S has an upgraded Micro Four Thirds sensor with 20.8 megapixels and 12.8 stops, capable of shooting 4K at 60 fps. It can also shoot RAW photos at 20 shots per second, and “has more than half a dozen swappable lenses.” Another option is the Zenmuse X4S, a 1-inch sensor that shoots 20-megapixel stills.

TechCrunch reports that DJI just produced an 11-minute film, shot entirely with the Inspire 2 by Academy Award-winning cinematographer Claudio Miranda, ASC (“The Life of Pi”), and starring Ryan Phillippe and Noah Schnapp as an artistic father and son making ends meet in the Great Depression.